Been a bit lax posting news of photo usage lately. I was inspired to post some more by news I just received of one of my photos being used on a billboard in Las Vegas. Pleased with this one. 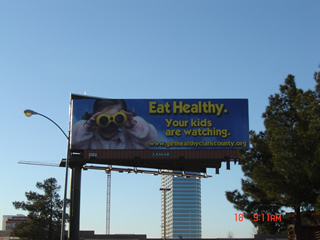 many thanks to Julie Hurd for the photo

Here are a few more while I’m on the subject:

Also, one of my photos is being used by Craig Zobel to promote his film Great World of Sound and the Sundance Film Festival, which is pretty cool. Best of luck to Craig at the festival.