At risk of being accused of the geekiest blog post ever, I give you a very good punt at the title. (Although this is perhaps more autobiographical/social history than full-on tech gunk.)

In the beginning there was only silence. As an 11 year old boy I sat at the my ZX81 and black and white portable TV* and played Quicksilva Scramble (all hail @zoupdragon) in a very quiet room. I wasn’t even into music that much then. I had an old 60’s boxed record player with Bakelite arm. It was ace. I played B. Bumble and the Stingers and Lieutenant Pigeon, old hand-me-down 45’s from the 60’s.

Other than that, the only sound you would have heard was the scream when the 16K RAM Pack** got bumped at the end of long 2 hours typing a program listing out a magazine.

Yes kids, in those days, you didn’t get highly produced demo discs on the covers of magazines. You got BASIC listings that you had to type in yourself. That were all shit. And rarely worked.

I did occasionally write my own programs. In true “Wester Hailes Child of the 70’s” style the first two programs I ever produced tried to pick the winner of horse races (it always picked the favourite and was a big fan of Lester Piggott) and calculated the winnings from a bet (it took ages to type in the bet, my Dad could do it quicker in his head).

The world of the ZX81 was that of Harold Lloyd. Silent, black and white and fell over a lot. But you never quite get over the first time you type:

And then I got a ZX Spectrum. I was lucky enough to get a 2nd hand one for my Christmas as a friend at school was upgrading to a BBC Micro. They were the hot ticket item of that year. They were very hard to get as Christmas approached and some poor individuals couldn’t get one and ended up with an Oric 1.

Wow! There was colour. Wow! There were some occasional beeping sounds. Ok, so each screen in The Hobbit took an age to load. Ok, so the keys were inexplicably rubbery. But it was (and still is, I bought one recently) a wonderful machine.

I still remember very vividly the day I got Jet Set Willy. Giddy and awestruck, we played it for hours, mapping each screen on increasingly large amounts of line printer paper. Remember, there were no save games, no chance of redemption. Each new try had to get further, you had to go better. It punished weakness. I played it so much that day I went to sleep dreaming of Quirkafleeg. It was my first exposure to what became known as the Tetris Effect – seeing blocks fall in your sleep after extended playing – long before Tetris was born. Perhaps the “Willy Effect” might not have been the best name. Now that Matthew Smith is no longer missing, he should campaign for the effect to renamed.

For all the splendour of the Spectrum and the hours I spent playing Ultimate games, nothing really compares what came after and the wonder of the Commodore 64. Yes it had a proper keyboard, yes it had a lot of great games, yes it had joysticks and other paraphernalia but, and finally getting to the point, it had the SID Chip. Everything else was a progression on what had come before. The SID chip was brand new. Suddenly the world had sound worthy of the name. 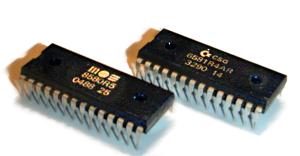 I’m not going to say anything in great detail here about the SID chip, I would do no better than to recite the information of the excellent SID Chip Wikipedia page. So go read that.

I loved the music on the C64. Remember, I grew up listening to instrumentals from the 60’s and, by this time, had stumbled over Jean Michel Jarre. I know, doesn’t exactly paint the teenage me as Mr. Super-Cool. But facts are facts.

The leap from beeps to full 3 channel sound was huge. It was bigger than it needed to be. But that is what Bob Yannes set out to do.

The first extensive programming I ever did was with the SID chip. It was a fairly labourius process in BASIC. You had to set up the sound each channel would make using an ADSR (Attack Decay Sustain Release) envelope. They look like this, for those who like their graphs.

The range of sounds you can get from variations of this simple envelope is amazing. Typically you would use 1 channel as a kind of bass line, one for the ‘drums’ (drums is perhaps a little grand, it was more of a white noise/phlegm kinda sound when I did it) and the final voice for the melody. Listen to any C64 tune, you can usually pick out the 3 channels.

Then you had to play the notes. To do this you would POKE the frequencies and note lengths directly into memory. Doing this in BASIC was extremely tedious and fiddly. It took quite a while. I once did a passable version of Smalltown Boy by Bronski Beat (if you ignored the phlegm).

I never reached the heights of the true master, Rob Hubbard. And, in particular, my own personal favourite, the Monty on the Run theme. Presented herein through the miracle of blip.fm. I can still remember the first time I heard it, in a freezing cold house in Inverkeithing. The then home of certain linguistics guru (and source of much of our C64 related fun). And for that, I dedicate this post to him. Cheers JR.

Have a listen and think “that’s crap, you’re weird”. You had to be there. And be me.

Because of the culture of cracking at the time, much of the music was extracted from the games and presented as standalone programs with funky graphical backgrounds. I had many tapes of these that I would load and listen to. Long before the MP3 player was even considered, this music was kicking about and being shared digitally (albeit on C90 cassettes).

You may think that I am singularly weird in my love of the SID chip. Nay not so. Much of the music is still available now and there is even a band that does rock covers of the tunes. In fact, compared to many devotees, I retain only a passing, misty-eyed interest.

What I find sad about these days of ever rapid technology progress is that there really isn’t anything all that new any more. It’s just improvements and variations on theme. More of this, faster that. I really hope that sometime soon we get another major transition, moving from silence into a world of 3 channel noise. I’m looking forward to the next SID chip. Whatever it may be.

* my daughter is astounded by the notion of black and white TV, she asked recently “Was all the world black and white then?” Actually, it was brown.
** not a typo, that is 16K, yes