What The Romans Did : Part 1 – Herculaneum

Any traveller with a sense of decency will, on visiting the vicinity of Naples, decide that a visit to some Roman ruins in on the agenda. Most will choose Pompeii but many will find good reason to saunter along to its little brother in the ‘cities dug up from under volcano stuff‘ stakes, Herculaneum.

The story is so famous it requires little re-telling here. Suffice to say that in AD79 property prices in the area of Mount Vesuvius took a bit of a tumble and Roman types were heard to say (in the Latin of the day) “shotty, big firey thing“.

My visit to Herculaneum was odd in that I arrived on a day when the weather was more Ardrossan then Italy. As a photography type, this was a bit of a disappointment. A more flat, dull day you can’t imagine. Undeterred, I clicked away and here are a few of the sites of Herculaneum presented for you in spectacular almostnocolortm. 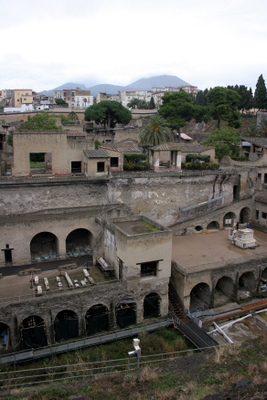 Two things immediately strike you about Herculaneum (or Ercolano if you’re feeling all local). The site doesn’t seem very big and, in a weird way, it looks almost modern. In this shot you can see where the buildings of Herculaneum stop at the modern stuff starts, but it doesn’t really leap out at you as you would expect. If it wasn’t for the fact that arches are posh and expensive these days it might be less obvious still. This shot also shows how deep everything was buried. 16 metres in fact. The arches at the bottom were where a National Geographic team found hundreds of skeletons, the old coastline was there and the people cowered there waiting for boats to save them. Sadly…

There is much more to be uncovered too but it mainly lies beneath the modern city so, as our guide repeated a dozen times “this will never happen“. I think she was miffed about this. Having seen the modern city, I can sort of understand why. There is a frustration with not knowing what cool stuff might be in there. Although, having seen the Roman public toilet in Herculaneum, there will be dull stuff too. But Herculaneum proves that things in archaeology aren’t just, as Eddie Izzard would have it “a series of small walls”…

Although that, in many ways, is what makes Herculaneum stand out as an archaeological site is that it isn’t just about visualisation based on the small amount is left. Because Herculaneum has much that remains intact. You don’t get many 2000 year old interiors these days. Although there is this one pub… 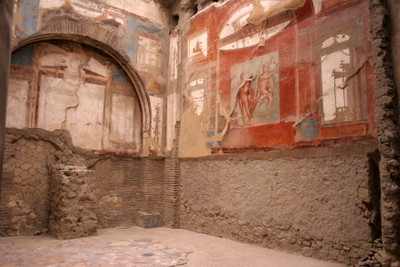 Well, I did in the 70’s, that kind of wallpaper was cool then. This is one of the most famous interiors of Herculaneum, frescoes depicting Hercules himself doing hero stuff in the Hall of the Augustals, a group of men was dedicated to the worship of Augustus and the later Emperors. 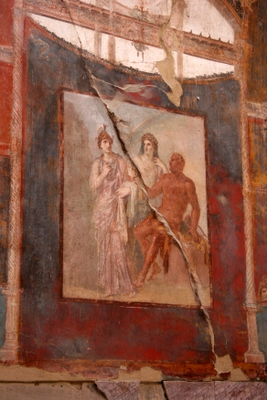 And the fresco on the other side. The guide was very clear to say that people shouldn’t take photos with flash. As you can see, I didn’t. But everyone else there did. People simply don’t know how to turn off the flash on their point and shoot. It has to be said the guide didn’t bat an eye. I did. I let out a hurrumph not unlike the noise of the shutter of my DSLR set at high ISO. 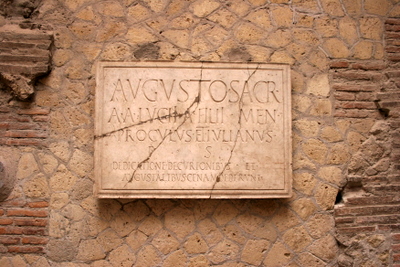 And here’s where they left their mark. Swearing in Latin, dead sneaky. This also shows some of the funky wall construction at Herculaneum. Weird mixes of brick and other stone. For a lover of textures it was great. Shame the light was bad. ( download some Roman textures here ). 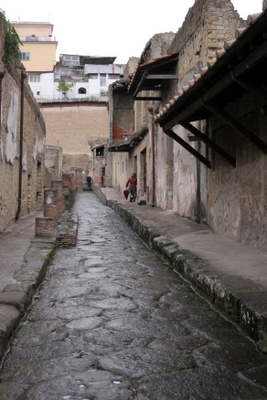 As our guide was at repetitive pains to point (over our hard won and generally out of charge radio headsets), Herculaneum was largely a residential down of the fairly well to do. So the streets, such as they are, are very narrow. The pavements sit high above the ‘road’ surface for very good reason. Much of what was flung out would have ran down the middle ( stepping stones at crossing offer a safe way to cross). Again, this little street scene looks quite modern and be straight from the streets of Darrowby. One of the benefits of a rainy day is that you can almost get shots like this with no one in them. This is quite a busy tourist place, so getting great photos is, well, not all that easy to say the least. As you can see, I enhanced the AD79 feel of this shot with a woman in a red jacket with a brolly. 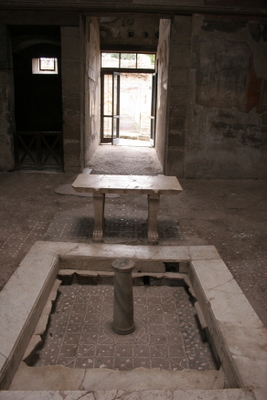 Another of the famous houses in Herculaneum is the House of the Wooden Partition ( or door ). Herculaneum differs from Pompeii in that wooden artefacts were preserved carbonised. This house also has a wooden bed, not unlike the one I slept in during my 1st year at University. This is the view out the door looking away from the wooden door. Again, Herculaneum gives the best feeling I’ve known of an ancient interior. I can imagine myself walking in that door and laying my various mobile phones on that little marble table before pausing briefly under the compluvium to catch the last rays of the day. 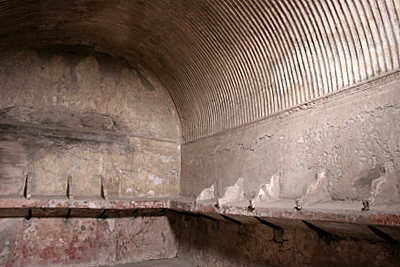 One of the frustrations of the guided tour is being dragged round at someone else’s bidding in a large group. I only had a few moments as I passed through the amazing baths in Herculaneum. I immediately start to think that I need to go back and try to get more time on my own in these places. You don’t really get time to feel what the place is like. For a short trip, a whistle stop guided tour is fine but I felt I missed quite a lot and a longer, free roaming trip with a map and a book would have been far better.

This is very true in these baths as there can be very little different from what it has been like originally. The amazing vaulted (and functional) roof is intact and everything of the Roman world is here, innovation, style, function, technology. 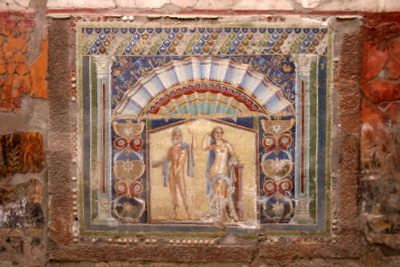 This fresco ( of Neptune and Amphitrite in the House of Neptune )shows the amazing level of preservation at Herculaeum and it gives an inkling into the current challenge of preserving all of this now that it is open to the elements. As at Pompeii, most new excavation at Herculaneum has been stopped so efforts can focus on saving what is there. The modern city above is causing issues and the elements will take their toll. 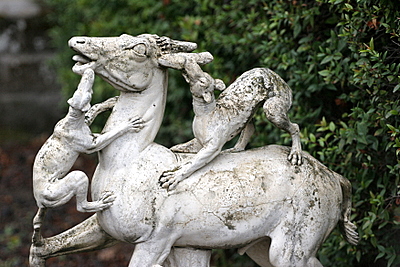 One of the most famous houses in Herculaneum is the House of the Deer, named after the statues of stags, seen here being ravaged by dogs.

There is a very simple rule of travel. Whenever you are within reasonable travelling distance of a UNESCO World Heritage site, you simply must go. This is doubly true for Herculaneum. Even on a dull wet day, there are very few glimpses into the past like it. I would definitely recommend getting a book and a map and making your own way round. The fact is, that I’ve only just been there, but know I should go back. There is much still to see.

Here endeth part 1 – who can guess what part 2 is?