What The Romans Did : Part 2 – Up Pompeii

Following on from the unacclaimed post on Herculaneum, the inevitable Pompeii post rears its head. This was my second visit to Pompeii which is perhaps reflected in my slightly unenthusiastic collection of images or perhaps I was just deflated after a rainy morning in Herculaneum.

The thing that strikes you most on leaving Herculaneum and arriving in Pompeii is quite how much bigger the site is. And this, for the most part, is the largest source of frustration. In the requisite tourist trip 90 minute visit, you don’t really see much and none of the further flung cool stuff like the amphitheatre.

This also means that all the thousands of people arriving in Pompeii each day are concentrated in pretty much the same area. This makes it permanently busy and you find taking photos of anything without a fat American in the shot is next to impossible. It also means that you often have to wait to get into houses and villas as it is full of, well, more fat Americans.

But before I appear too negative, Pompeii is a real treat. Just try to make your own way there, go early and have a really good explore. There is much more still to be uncovered at Pompeii but, like Herculaneum, most excavation has stopped in favour of preservation ( presumably from fat Americans ).

Unlike Herculaneum, the streets are very wide in keeping with Pompeii being busy port full of bustling commerce, chariots and the like. Again, the Romans rather kindly made it easy for the pedestrian to cross the street without getting ones toga caught up in the effluent and horse leavings.

These photos are taken up the streets that the guides don’t take you, hence the relative quiet.

To illustrate my point, I give you a fat American. I assume he was American. As you can see, even on a cold October day, it’s a busy place. Don’t expect to sit peacefully taking in the awesome Roman-ness of it all, your silence will soon get broken. 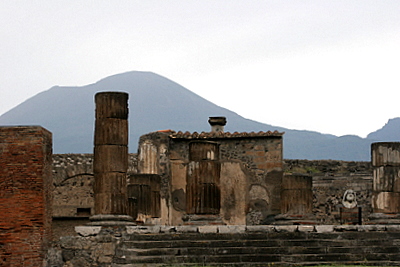 The forum at Pompeii is very impressive. A big football field of an area (not pictured here coz it was just too full of folk). At the north end of the forum is the Temple of Jupiter, seen here. That’s Jupiter’s head delicately placed on the bottom of a column like a talking head from Futurama. Wherever you go in Pompeii, the menacing presence of Vesuvius is always visible, which adds to the impact of it all. 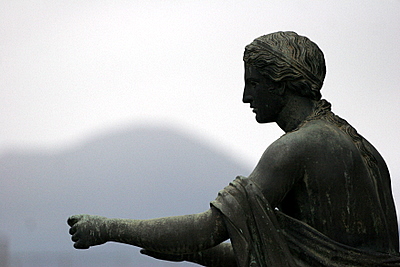 The Temple of Apollo features some very nice sculpture. Although a smaller temple, the enclosing walls give it a good atmosphere. 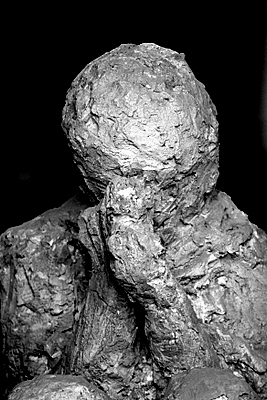 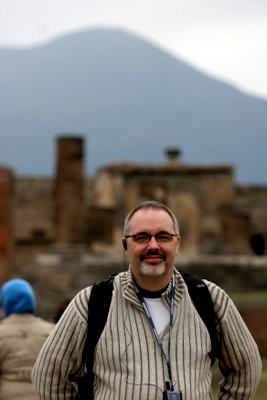 For the purposes of balance, it’s not just the Americans that were fat. Shotty! Volcano! Run fat boy run! ( a rare appearance from our intrepid blogger ).