I saw this film a few years ago on DVD and, after seeing it listed on BBC Four this week, I went in search of a Blu-Ray version

The film itself is not the usual French style-fest, with a complex plot and a lot of action it more resembles a Hollywood movie in it’s style and delivery. Unsurprisingly, it looks like an remake is on the way. If Harrison Ford were younger he’d be a shoe-in for the lead role, requires expertise in ‘familial angst’…

Based on the novel Ne le dis à personne…

by Harlan Coben, the film tells the story of a pediatrician 8 years after the murder of his wife as he starts to think she might be alive. Avoiding spoilers at all costs I’ll say no more about the plot other than to say it is as good as it is complex ( very much in the style of that excellent novel The Beatle Man

🙂 ). And, unlike another film I reviewed here Caché, it does provide a more pleasingly complete dénouement. 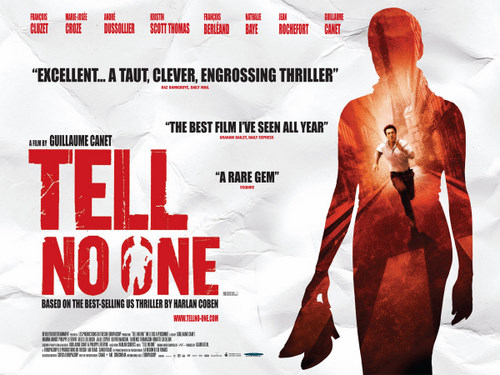 Tell No One Movie Poster

Visually, being a city-based thriller, the film was never going to be a stylish beauty but the Blu-Ray print is excellent. Being a thriller, there is a fair bit of dashing around at times with some wild camera work that doesn’t care about image quality but, when required, most scenes pop off the screen very nicely indeed.

I’ve read complaints about the sound in other reviews but it didn’t trouble me overly.

you may as well ). Of course, you should see if before the Hollywood remake so you can say “well, of course, I’ve seen the original French version mwhaa mwhaa mwhaa…<flounce>” and because I have a horrible suspicion that the plot may have to be simplified or heavily clued for the popcorn bucket test audiences.

Other reasons to watch it: