It has blockbuster written all over it. Black and white, in German set just before the start of the First World War. Hand me the popcorn, I’m set. Although, being a Michael Haneke film it is about as far from Hollywood as you are likely to get.

Despite being the second Blu-Ray review I’ve done of a Haneke film ( check out the Caché review here ) I’m no fan boy. His films are not a flurry of excited enjoyment. As with Caché, there is much to consider, debate and ponder and most of that is done after the film has finished. You never get a feeling of satisfaction at the credits.

Let’s deal with the basics. A small German village is beset with a series of unfortunate events (no, not those ones) which seem to be a punishment for some unspoken crimes. These lead up to the outbreak of the First World War and the people worrying about what that will mean for them.

The story is told through the eyes of the village schoolteacher a narrator many years after the events ( reminscent of the narration in The Name of the Rose ). The action moves with an very slow pace, it’s like the most suspenseful of Hitchcock drawn out in slow motion. Not that there are ever any great shocks or surprises, it is the almost mundane treatment of the events that make the point.

The film is a long essay on evil. But not the Hannibal Lecter bitey kind, the more chilling everyday evil that wanders hidden through society (ooh, hark at me). It suggests that terrorism exists everywhere, not just its traditional forms. I was also reminded of the themes from many of the novels in Zola’s Les Rougon-Macquart which also focus on the darker side of ‘normal’ life, especially La Bête Humaine which has a similar brooding evil and is also set at the outbreak of a war.

The acting stands out with some truly excellent performances from some very believable child actors. Given the pace of the film, the acting has to be exceptional. 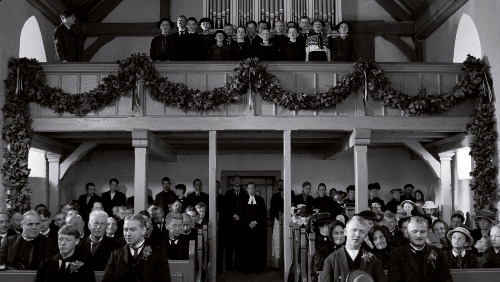 This could easily be a still from a German remake of To Kill A Mockingbird. But this is not a scene of hope in the style of Atticus, this is us faced with the faces of the villagers in the, perhaps certain, knowledge that at least one of them has been a bit naughty.

With regard to the Blu-Ray itself. Some disappointment here. There are a lot of dark scenes were the artefacting is pretty horrendous, smooth clean blacks they ain’t. You can just about cope though as it isn’t all that frequent. My main gripe is about the black and white itself. The film was shot in colour and converted to black and white and all too often, the scenes are too grey. Maybe this is just the photographer in me wanting it done a different way. I’m sure they must have considered this and chosen to do it this way to match a particular style of old, but I wasn’t a fan. I would have preferred more contrast and sharpness overall. There are some good images, very white vistas of fields and trees look good but in the acted scenes it can look a bit bland. As I say, that could be a personal thing as I would have gone with a Gorman-Holbert type conversion on the lot.

I enjoyed The White Ribbon whilst not been blown away by it. I think this is largely because of my objections to the print niggling at me too much. The mood, characters and acting are all excellent. If you like immersive, challenging cinema, it’s well worth a look but I think a DVD copy would suffice.