Portugal vs Spain : In Context

Avid followers of the World Cup will know that Portugal play Spain tonight in a last 16 game. Clearly a game to look forward to with a vast array of talent on display (if ever there was a way to guarantee a dour 0-0… ).

In the UK, we are rightly focused on our traditional rivalries and less aware of the depth and ferocity of the rivalries that exist elsewhere. I discovered this a few years ago in relation to the Spain/Portugal rivalry, so I thought the story would be worth telling to give tonight’s game added context.

I was lucky enough to go to the final of Euro 2004 with my Dad. We had a great few days in Lisbon. The final was between Portgual and Greece and Benfica’s impressive Estádio da Luz. 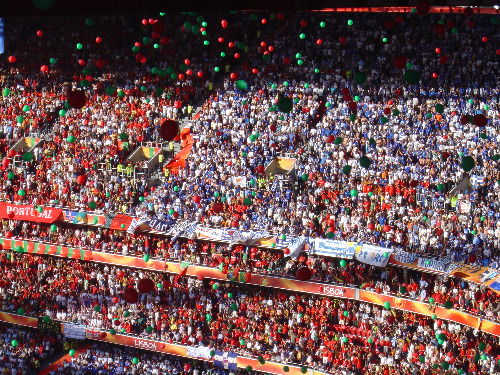 Greek and Portugeuse Fans At The Game, one of my first ever MorgueFile uploads

The game itself was a bit of a disappointment. Greece were very hard to beat and had got the final with a succession of dull 1-0 victories so repeating the feat in the final shouldn’t have been any great surprise. The Portuguese didn’t really turn up either, they looked a little overawed and limped to defeat.

We were staying at a Hotel which was a few Lisbon Metro stops away from the ground. After the game we walked with the masses towards the tube station and were a little surprised by the number of smiles on the Portuguese faces. It didn’t make sense. They had got to the final of a major tournament at home and lost to a team they should have beaten. This was perhaps their best chance to win such a tournament and they had blown it. The reaction of the fans was a little odd.

It took a while to get to the station and, eventually, get on a packed train. Everywhere we looked the reaction seemed to be the same. On the train, I was crammed at a door with some Portuguese fans so I did my best to have a chat and, if I could, to work out why everyone seemed to be smiling.

One answer came back from everyone I spoke to “We beat Spain“. Portugal had beaten Spain to reach the final. That was more important to them. A win in the final was only the icing on an already delicious cake.

When losing a major final is secondary to having beaten your nearest neighbours, you get a very strong sense of the rivalry. If Portugal win today, that will be an enormous thing for them. They will care what happens after that, but maybe not as much as you think.

I’m sure this is true of other places too. I was talking to a friend today who watched a Serbia game in Croatia last week. Seems the Serbs ain’t all that popular either!