No visit to Kraków is complete without a trip to the spectacular Wieliczka Salt Mine, Poland. A UNESCO World Heritage site, the mine continuously produced salt from the 13th century until 2007 and is now a major tourist attraction with over 1 million visitors a year.

I went on a cold Saturday in February so the constant 14 degrees underground was very welcome and it also meant that it wasn’t too busy.

It’s very easy to get to with the organised tours picking from most hotels. We organised our trip out by taxi which was a little cheaper ( for 4 of us ) and meant we could leave a little later in the day.

All visits to the mine are by guided tour so make sure you go at the right time to get a tour in your language. The guide is worthwhile as it would be fairly easy to get lost!

You enter the mine via a large metal door and immediately descend a seemingly never ending spiral of 384 steps to the first level of the tour nearly 100 metres down. This climb down and the remaining 2km walk mean that you need to be fairly fit and mobile to take the tour on.

Despite being a working mine until fairly recently, the mine has constantly been carved and decorated by the miners and what they have left behind is a rare treat. 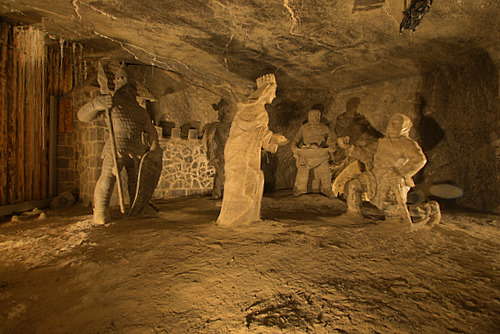 Much of the carving is in the form of figures ( and sometimes gnomes ) depicting figures from the life of mine and Polish history. The mining has left natural gaps as the miners followed the seam of salt and these are very often filled with scenes and statues. 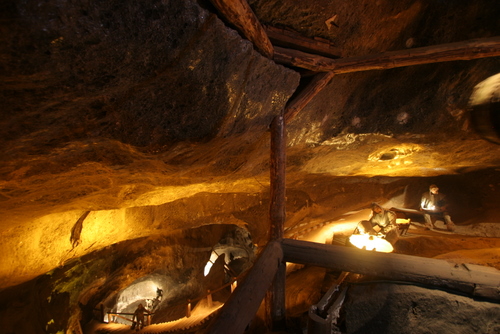 In an attempt to bring the working and history of the mine to life there are a number of diaramas and figures on the tour. These are not universally successful but do brighten up areas and help the younger visitors understand better. 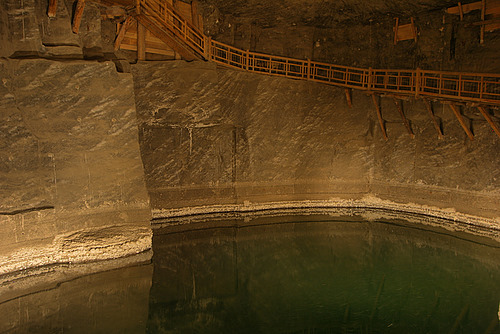 There are a number of artificial salt lakes on the tour. As salty as the Dead Sea they have been created to channel dangerous water away from the mine workings. Flooding has always been a constant threat in the mine.

If you don’t like the idea of being hundreds of feet underground then the mine may not be for you. There are no small tight spaces and, in many cases, the areas you are in are huge. If you can keep your mind off how far away the surface is then you’ll be fine. Until the lift. More of that later. 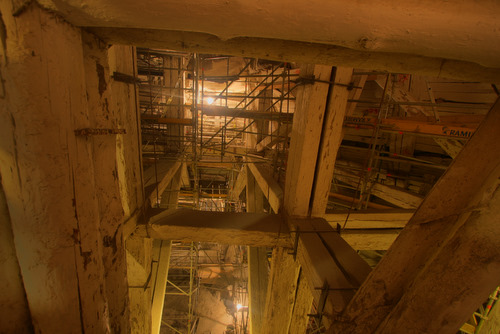 There are some dizzying spaces in the mine. This shows a drained salt lake gallery under refurbishment. 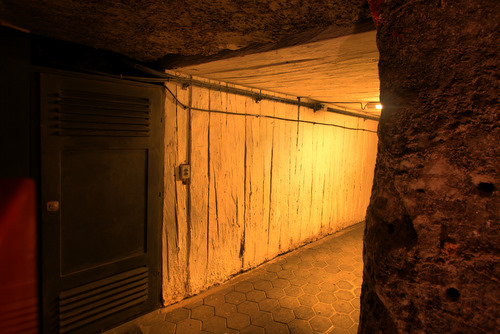 To give you an idea of what to expect, this is a shot of the typical passage you’ll walk through on the tour. Easily wide enough for 4 people across and not dissimilar to traversing the London Underground.

The undoubted highlight to the mine tour is the spectacular St. Kinga’s Chapel. Carved from the salt 100 metres underground, the chapel is an enourmous cathedral 54 metres long with carved walls and alter. 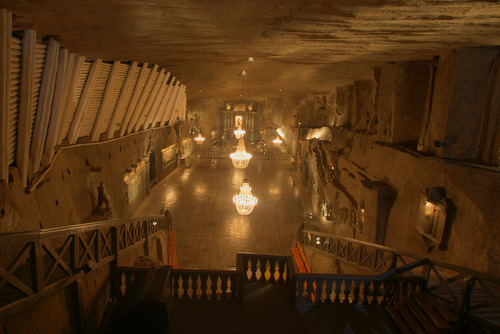 Shot from the gallery above ( from where you’ll get a brief son et lumière ) this shows the full extent of the chapel and its chandeliers, the crystals of which are also carved from rock salt. 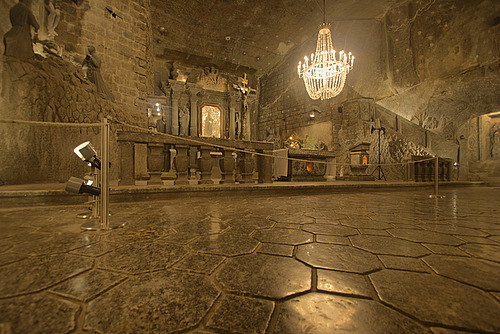 This shows one end of the chapel with the altar cut from the salt. The floor is also made of rock salt tiles. In most of the mine the walls really do taste salty. 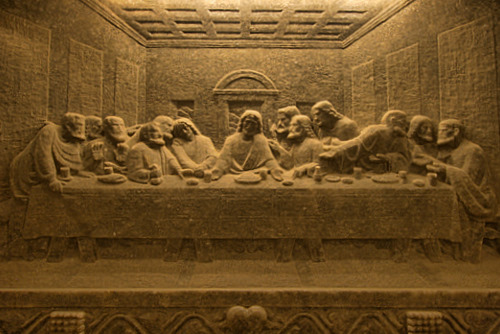 This detail from he chapel wall shows a 3D fresco of the last supper cut into the wall. All the carvings have incredible depth and detail. 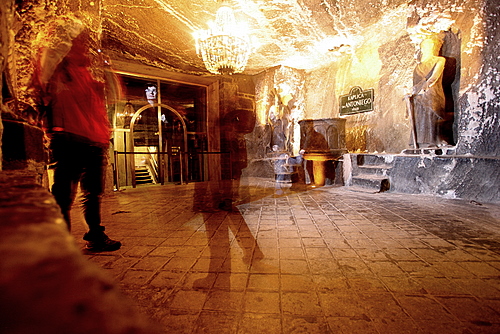 If you want to take photos or video in the mine make sure you buy a ticket for an extra 10 zloty and you’ll get a sticker. They sell these at the entrance to St. Kinga’s Chapel underground too ( for obvious reasons ). It’s not an easy place to take photos. You are led round by a guide so in most cases you will be with your group so avoiding people in the shots isn’t easy, as this photo shows. Obviously, because it’s very dark you ideally need long exposures. Flash doesn’t really work very well but isn’t prohibited. You can take a tripod but you don’t really get long to setup. All of the shots here were either handheld on perched on an available flat surface. 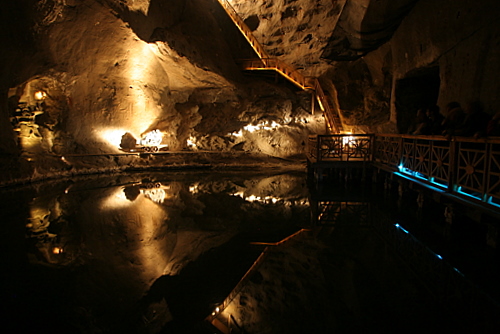 Towards the end of the tour there is another brief son et lumière in the Wiemar room with the music of Chopin. It’s a very dark room with another artificial salt lake and the walls lit.

The final level of the tour is at a depth of 135m. Here you will find the banquet and conference facilities inside the mine. You’ll also be startled by a full signal on your mobile phone. 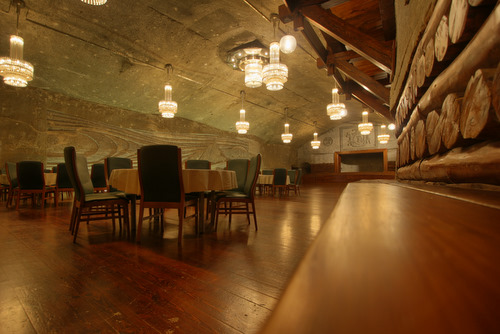 The mine provides a very singular conference experience. 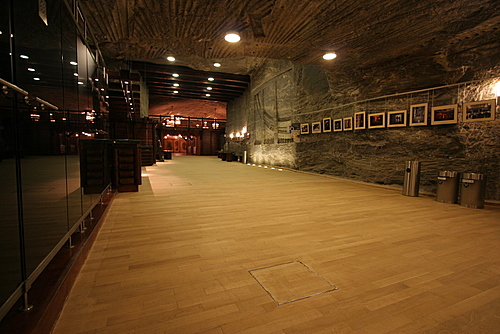 This foyer is the way in for conferences and the way out for tours. Beyond here you have a short walk down to the lift. The lift can take up to 36 people split across 4 levels. Each lift compartment is very small, cramped and dark (and impossible to take a picture of). The lift journey back to the surface only takes 30-40 seconds but might not be all that pleasant if you don’t like being cramped in the dark.