Never Be Too Busy

I like to be busy. And I usually quite enjoy being too busy.

I was once given some very wise words. You should never say you were too busy to do something. Instead you should just say that you were doing something else more important. Being “too busy” sort of implies that you are perhaps a little out of control rather than aware of the all the necessary work and have consciously decided not to do certain things. Obviously, telling someone you’re too busy is often much easier than saying you won’t do something because it isn’t important enough but, well, the truth will out.

You naturally develop techniques for coping with being “too busy”. I wondered if there was any way you could explain and quantify the issues and solutions surrounding the ever-present spectre of busy-ness.

None of this thinking, I would say, is fully formed but I’ll see where it goes as I type.

The key to coping with being very/too busy is being able to deal with multiple things in parallel and be able to successfully context switch between them on demand. I’m thinking mainly of management positions, but it could apply equally anywhere. As a management role gets more senior, the more context switching into little hyper-detail mini-universes is required.

Too Much
Let’s assume there is just too much to do and you’re not going to get it all done. In fact, let’s go further and say there is it very likely you’re going to fail to do a lot of it. The first thing to realise is that you have to define success differently. Success is now defined by how well you control the failure.

Ignoring something isn’t an entirely negative approach. The initial true priority of something isn’t always obvious. People after for things will usually misrepresent to their own ends. Ignoring allows the task to find it’s natural home. There is a retry loop and if the volume increases as it goes round the loop then you can think about reacting to it.

The fundamental rule is that being busy should never generate an absolute “no“. If it is something you or yours should be doing then you have to take it on and deliver based on priorities. Straight “no I’m too busy” forces people to go somewhere else, usually the wrong place, and things generally get worse from that point.

Catch it, Kill It, Bin It

As you dip into each area you are required to be ( in this order, you may not need them all ) :

How do you achieve this across many areas and disciplines? With each you task you have to make a choice about what you are going to do with it. There are 4 main choices. Crucially, you have to if any particular conversation should be:

The key skill in this decision when things are thrown at you fast is Context Switching. If you’re going to decide quickly, you’re going to have to get your head in the game quickly.

Context Switching
I context switch a lot. I suspect most people do. Most of the time you are largely unaware you are doing it. There is a no doubt that it is a skill you have to hone over time. You might have to do it between back to back meetings or calls or, more rapidly, if you, like me, have stream of randoms appearing at your desk to ask you stuff.
It’s all about the mini reboot and, much like the technical definition of same, you need to drag enough knowledge into memory to get going or listen and talk credibly while you background load the information you need. Obviously, you always have the parachute of “I’m sorry, I have no idea what you’re on about” – but that can only be used credibly when it’s genuinely ok for you not to have a scoob. The more overall credible you are, the less risky and more believable not having a clue is, you can use this more and more over time if people trust that you’re not an idiot.

Sometimes context switching can be easy. You can be solving partial differentiation equations and be interrupted by a kid asking if they can stick their fingers in a socket and know immediately what to do without much thought. Context switching to the obvious, using up your free common sense is fine.

To be a real context switching genius it does help to be quite bright generally but having help is handy too. I once saw a great example of this with Indian billionaire Mukesh Ambani (you can read the whole mad tale in this post). He was meeting a Japanese professor about a fairly random technical subject. He got a 5 minute briefing from a collection of minions and was startingly credible for the whole chat.

Here’s a picture as a vague attempt to try and visualise what I’m on about (and, at the same time make things needlessly complicated, as is my wont). Imagine each ‘vertical’ is a subject area/issue/whatever. The distance down into the subject is how much knowledge you need to be credible/value adding/decisive etc. The good news is that you, hopefully, get common sense for free in each area. For common sense, you could substitute experience and, therefore, as time goes by, you should get more of this. The best news is that, as you increase the green bits, you should be able to be useful with stuff you know nothing about with experience/common sense alone. Good managers can do this. Turn up cold, listen, advise, from nowhere. You see, you can skip the specific credibility of a given subject area just by being all round wise, you can even add value that way. 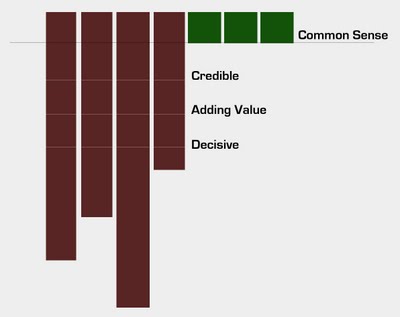 Trouble is, for this model to work for you, you need to be self-aware. You need to know what you don’t know. Many don’t. Many poor managers will assume they know stuff or assume they have to make it seem like they do so will leap in cold to things that they have no appropriate knowledge of and, well, muck things up.

Prioritisation Techniques
In addition to understanding your level of knowledge as you context switch, the most obvious other thing you have to be able to do is prioritise. Prioritisation should be a straightforward exercise, but it rarely is.
By ‘obvious’
Nothing takes the pain out of deciding what to do next better than the appropriate course of action being blindingly obvious. OK,  so this may not always be on the “building on fire” variety. But you will know when you need to drop everything. Won’t you?
By ‘volume‘
Could be the loudness (seniority) of a single voice or the clamour of multiple voices. This becomes a particularly important method when you have played the ignoring retry loop.
By ‘assumed escalation‘
This one is often the most powerful and least often used. Someone wants you to do something, you’d rather do something else. What you need to do is work out will happen after you tell them to sling their hook. Who will they escalate to, who will support you if you were to escalate? Ultimately you need to put yourself in the head of the whoever will arbitrate and work out what they will say. If they will come down on the other person’s side, save yourself the hassle and looking like an obstructive idiot by just doing it. If you are sure you’re going to win out, unleash the hook slinger.
By ‘ROI‘
You need to allow yourself moments when you break the main rules. Sometimes a few moments of effort can yield big reward. So maybe something isn’t that important but if you can make it go away to stop people constantly yapping at you about, then why not just do it. Your blood pressure needs a friend too.
I’m sure there are maybe more things I do without knowing. I’m sure many of you can think of more, but there is no doubt that avoiding the feeling of being too busy comes from being able to prioritise correctly and from a strong self-awareness of what you are able to do.