When people look at my Archos 504 these days, it usually gets the same reaction “What on earth is that thing?“. To which I reply “It’s my MP3 player”. At which point they are even more bemused “…but, but… it’s, erm… HUGE.” “Yes” I reply politely “I also use it for self-defence.”

They chuckle, sort of, and wander off vaguely bemused. Actually, I should say ‘shuffle off‘ as that has much better pun potential in this regard.

It does demonstrate the pace of technology these days. A device that was released in 2006/7 is considered an outlandish freak now. When I think retro, I think of things from the 80’s – not 80 minutes ago. But such is the way of things. 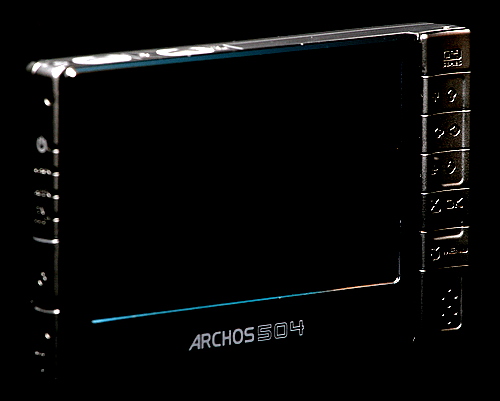 So, let’s get the main questions out the way:

So why, you may ask, given it’s obvious limitations and bulky demeanor do I love it so much? Well, I won’t deny an element of nostalgia. It has been with me for a good number of years now and have accompanied me everywhere I have been. But that’s sort of the point. It has survived being baked on the dashboard crossing the desert of Northern Spain. Last winter, I left it in the glove compartment of the car when the temperature dropped to minus lots and it, sluggishly, came back to life. It gets thrown in bags, around the car, around the world and still performs like the day I first took it out the box. This, I think, is uncommon in modern devices that are built expecting to be quickly obsolete and replaced.

Funny thing is, even when I travel with a smartphone AND and iPad, I STILL take the Archos with me. Despite both of these devices being capable of playing the music and movies I might want to watch, I still use the Archos. Is this simply because I’m a quasi-OCD creature of habit or is it because it genuinely fills the niche better?

One thing is for sure, a device for watching movies on is better served by not being touch screen. Much as I am learning to adore the iPad almost as much as the Archos, the constant battle against fingerprints is a little wearing.

Part of it is also the realisation that with device convergence comes battery reliance. I always need my phone to work so why run the battery down listening to music or watching a movie on it? The big chunky battery in the Archos goes forever, despite it’s age. And if it dies, I can still make phone calls.

I don’t think there is any device that has a good enough battery that allows it to be solely relied on for everything. In fact, if anything, you need to be more careful now with smartphone battery life than ever with their insistence on doing all they can to eat the battery while you’re not watching. This is particularly true now that I will often tether my iPad to the phone for browsing and email. Recently I was getting on a plane with a colleague who’s boarding pass was only on his iPhone. The battery died in the queue to board the plane. Queue a frantic charge off a laptop. This is not how the future is supposed to be.

I use the Archos most of the time in the car and this is where its robustness is ideal. I did let it down a little by getting a not entirely attractive case (causing it to be referred to as ‘the purse’) but it means it can be flung about the car without much worry. I don’t feel comfortable doing that with either the phone or the iPad.

Perhaps all of this is just post-justifying stubbornness and resistance to change but something tells me it isn’t just that. If I look on the Archos site now at their latest set of products, I don’t see anything that fills the space of my Archos 504.  Lots of storage and a big enough screen to watch movies on. That’s all I want it to do. Of course, everything converges hoping to be the one device you buy and, I suppose, the product strategy/marketing people make the assumption that people only want to buy/carry one device. Do you happily carry multiple devices or are you fervently chasing a “one device does all” life?

I recently bought a new battery for the Archos. I’ve not used it yet. It’s just insurance as I’m sure the battery will die eventually and I wanted to buy one while they are still available. With the new battery, no reason to think that the Archos can’t carry on for many, many years. The purse will go on.