I have a weird conundrum when I fly. I love planes and flying but, having done it so much, familiarly and boredom bring a weird kind of tension. Usually, as I am on approach to Edinburgh airport, I gaze fixedly out the windows for landmarks and make sure we’re heading for some appropriate strip of of tarmac. Not so last Thursday night.

As we were turning over Livingston I was coming to the end of The Complete Maus and, entirely unaware of anything going on, I sat failing to fight back tears. I pretended to be a little tired, took off my specs and wiped them away.

After my Auschwitz post, Stuart and I were discussing such things and he suggested I should read Maus. His condition for lending me the book was that I write a review of it on my blog. So, here it is, several years too late obviously, thousands upon thousands of people have been reading this for years but hey, better late than never. 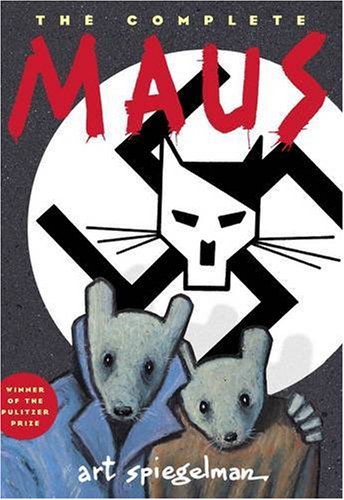 I’ve never read any graphic novels before. I’ve toyed with the idea of From Hell a number of times but I suppose I was always a little put off. As a colleague who sat behind me on the plane down to London last Wednesday said “Are you reading a comic?“. Even when I said “No, it’s a graphic novel about the Holocaust.” I could still see a “Yeah, but it’s still a comic” face.

So, what’s it about. Well, Art Spiegelman tells the story of his father and mother, Vladek and Anja Spiegelman, living and surviving in Poland in the period leading up to the war and then how they survived the war and imprisonment in concentration camps.

To say that it’s remarkable is a trite understatement. The Spiegelman’s story is simply astonishing and, avoiding spoilers, you can’t really grasp quite how they survived so many twists and turns. As the book says itself, perhaps survival is a random thing but you have to admire the massive resourcefulness the Vladek demonstrated. Though not all his choices were ultimately good ones, it is a testament to him that he was alive to tell is son the story.

And this is where the genius of the book itself comes in. Being told as graphic novel allows it leap of the page in a very immediate way. As a prose narrative it probably wouldn’t have any less impact but it wouldn’t hit you as quick. The use of animals as the characters ( the Jews are mice, the Germans cats ) works very well, it could be the were just easier to draw but it adds both vulnerability and menace.

Aside from the historical significance, Maus is a very honest story of a family. Nothing is hidden and, as much as you can understand it, nothing is hidden from the elderly curmudgeon that Vladek is as an old man telling his story (in a charming idiomatic way). It glares inside a big hole in the human condition and lets you see it all, raw, bleeding and ugly.

For all the despair I felt when I was in Auschwitz, it leaves you with a grain of hope that a few truly remarkable people were able to survive to bear witness. Much like my Auschwitz post was specifically to encourage everyone to visit, this post is to suggest that you really need to read Maus. I’m going to get all my family to read it and there is a very good chance I’ll buy a copy for quite a few people too.

Thanks to Stu for lending me it but with a grain of a complaint that he hadn’t suggested it before!