There is a lot to be said for simplicity in a film. Sure, a complex, surprising plot is always the most rewarding in a film but sometimes a straightforward good versus bad punch up is just what you’re after. And if that is what you’re after then 13 Assassins may well be for you.

This also helps if you’re not a fan of reading subtitles because you can pretty much tell what’s going on without having to pay too much attention to the words (which you should, obviously!). That said, there aren’t many words to read. 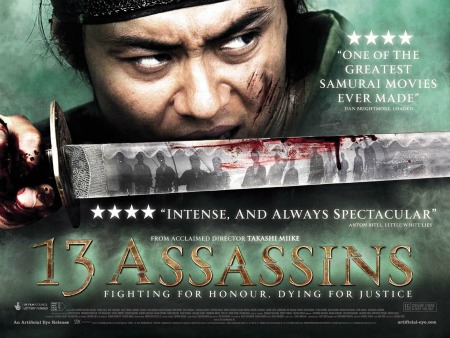 The plot is simple and based on real events. There is a bad guy in the shape of an evil, sadist Lord. There are some good guys in the shape of Samurai Assassins . The first half of the film leaves us in no doubt how nasty the bad guy is and is quite shocking (this isn’t a comic caper). As we learn more about quite what a horrible character he is, we see our group of heroes assemble. The second half is, unsurprisingly, one great big fight. What’s not to like. As movie shape goes, it’s not unlike Tora! Tora! Tora! – a slow burner of a setup with a biff, bang, pow ending. You have to be happy to sit through the setup. And, obviously, thoughts will inevitably turn to The Seven Samurai/Magnificent Seven.

As set-piece fights go, it doesn’t disappoint. My preference would always be for a martial arts rumble over a sword fight but there is much to like in the setup and invention of how the fight plays out. There are a few times when it feels a little like Assassin’s Creed, the protagonist surrounded by 10 attackers and only 1 prepared to attack at a time. Perhaps it’s a Samurai code thing, perhaps it’s the unavoidable need to let the good guys win. Either way, it’s not a huge complaint, the fight delivers everything you’d want.

Saying the film is simple pretty much gives away the end but I doubt very much you’d expect anything else and you will be suitably cheered.

As for the visuals, the Blu-Ray print is absolutely fine. The colours in the film are quite muted (which works well and adds to the realism) but it means the image doesn’t leap off the screen at you ( in the way that Red Cliff does at times ). The sound, especially in the fight scene, is great, so crank it up loud!

Really enjoyed 13 Assassins, a very worthwhile Blu-Ray purchase. Will you like it? As Harry Hill would say, there’s only one way to find out, FIGHT!!!