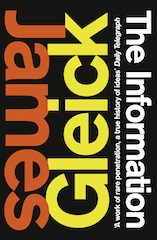 Like most people I will occasionally get asked what I do for a living. For the sake of simplicity and brevity I will usually reply:

Which is a convenient shorthand to embrace the 21 years I’ve hung about computers trying to make them do things that approximate to what someone wanted them to do. It covers everything, back in the days when I coded all the way to now when I spend the days lurking on Powerpoint and staring at spreadsheets. It is really a very neat, short representation that covers a multitude of sins across an large expanse of time. The galling thing is, of course, that I didn’t realise this until I read this book. Not only have I been saying that for 21 years, I’ve never really known what a cute shorthand it is and how it has a lovely circular reference to an even more galling realisation.

I remember doing a course called ‘Communications‘ at University and as I trundled through the book many names popped out that were recognisable if not directly memorable. Thing is, I’d never really made the link between what I’d learnt then and what I do now. They were somehow awkwardly related in a ‘that was then, this is now‘ kinda way. Not actually related like they should have been.

The Information: A History, a Theory, a Flood

is, first and foremost, a non-obvious book. Rather than a focus on the things we all know, love, touch, use, buy, covet it looks at the evolution of the theories that link them all. It’s also non-obvious because you wouldn’t think that a journey from fire beacons and African drums, through morse code and ending with quantum computing and Wikipedia could ever be an enthralling, entertaining and enlightening narrative. But that is exactly what it is.

This book is the work of Genius(sic)* at height of his powers. Meticulously researched, brilliantly thought through and executed this is easily one of the best (I hesitate to call it this but) popular science books I’ve read. I say popular but you have to be prepared for as much science as popular culture and, whilst logarithms and entropy may not be everyone’s bag, they’re not laboured and shouldn’t put off the non-maths geeks. Even the toughest of concepts are very well explained indeed with very good examples.

Quite rightly, the star of the book is undoubtedly Claude Shannon. Someone who is not as well known as he should be but, I suppose, he probably preferred it that way. There is no doubt that he should be considered alongside, if not above, Alan Turing in the ‘Father of Computing‘ game. The book tells the story of the two great men meeting – something I wasn’t aware of and this is an example of the book main strength.

It is a history of information theory which, on the face of it, could be a little dry. But sprinkled as it is with so many great stories, so much colour from an unbelievable variety of sources ( it is mind boggling to thing quite how much research went into this book ) it is never short of surprising and entertaining. Everyone who says, like me, they “work in I.T.” should read this book.

There are three final thing that I took from this book. The first is an understanding of the continuum of revolution. We think now that we stand at the beginning of a glorious new internet age, look at us, aren’t we clever. What the history shows us is that we are preceded by people who thought just as we do only for someone to come after and do something even more amazing. You see, although progress does sometimes take big jumps with new discoveries ( the printing press, the transistor etc ) the only constant in the whole history is the fact that people keep discovering new things, those new things are quite faddish for a while and then, ultimately they are superseded.

The second realisation is that, although progress happens through science and cleverness, no new discovery really gathers any real pace until people can make money from it. A theme that is very clear from the book.

The final and, I suppose, somewhat sad thing is that, as sit here spouting junk into WordPress on my iMac feeling very clever with my magic mouse and streaming music, I am but nothing compared the genius minds that worked out the beginnings that made all his possible. The cult of feature porn and ‘progress’ that is embodied by our gadget-fest existence owes much to a fairly small group of individuals who, as people, were quiet, unremarkable and would doubtless get trampled outside the Apple store at the launch of the iPhone 5. We think we’re all terribly clever, terribly important but we’re not. Right now, there will be a quiet, nervous person in a lab somewhere doing something truly remarkable. We may never know his or her name but we’ll happily consume whatever it is that there discovery yields for us. We’d do well to remember this.

It is a very long time since I’ve enjoyed a book as much as I did this, it is even longer since I felt so enlightened.

So, they next time I’m asked what I do for a living I’ll reply as before “I work in I.T.” – only know I’ll know what that means. Have you ordered a copy yet?

* for full disclosure, I was already a Gleick fanboy before I read this, if you’ve not read his book Chaos: Making a New Science or his Feynman biography Genius: Richard Feynman and Modern Physics then really, come on now…