A Question of Definition 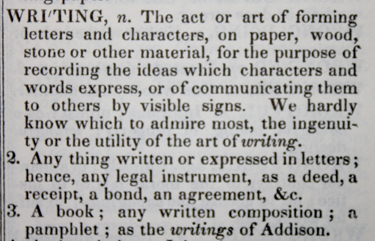 A while back, someone came to the house, saw my strobes set up and asked “Are you a photographer?“. I answered “well, I have a camera“.  In a similar way, when someone asks “Are you an author?” I’d say “well, I’ve written a book“.

This isn’t necessarily being overly bashful. It’s a problem of definition. You see, in my mind, I’m neither a photographer or an author because these are not primary occupations* ( in fact, they easily present a net loss ). So I’m not a blogger either despite the fact that I self-evidently write a blog.

I’m sure there are many that would argue the other way round. I’ve certainly heard that point of view. I suppose it has as much to do with how you’d like to be perceived. If you think your actual life is a little dull maybe it make sense to rebadge yourself. “Yeah, I’m a juggler, look I have balls“.

If we take earning out of the definition, could we perhaps work on quality or recognition? With regard to photography, my photos have been downloaded over three quarters of a million times, so I guess the people who used the photos think of me as the photographer of those images. Maybe it is the subtle difference between photographer and Photographer. You see, I’d never lay claim to anything like my (ahem) brother Mark. He’s a Photographer and I’m clearly not the same species. Similarly, Victor Hugo was an author and pretty much every town in France has a street or square named after him. As far as I know, there is nothing on any map named after me ( except for perhaps here ).

I suppose, in the end, it doesn’t matter – if you take photos, you’re a photographer, if you’ve written a book, you’re the author of it – call yourself what you will. Does prove rather neatly why I’ll never be a Blogger though!

* hence the difficulty in answering the question “what do you do?” – “eh, computers and stuff“