There have been many so-called ‘supergroups’ in music over the years, I won’t bore you any examples, I’ll just point you at this Wikipedia page. They’ll all listed there, even Electronic (!?). Thing is, I’ve never really been a fan of any of them, so, I’m going to propose my own. Not because it would be a good band (and given that one of the members is dead, it will have to remain theoretical anyway) but because it would be the most magnificent creation, just to see what would happen. An electic group, all with one simple thing i common (with one exception ), no one is sure what they’re there for.

I’ve decided to call the band ‘Shout‘ – you’ll see why.

And the members are…

I love the B.52’s. Kate Pearson has the most incredible voice, the songs are always fun and, despite an grave inability to sing, Fred’s interjections are alway welcome. He rarely gets to the end of the sentence “You see a faded sign at the side of the road…” before I’m on the dance floor. Obviously, you listen to Fred-less songs like Roam and you’re glad he decided not to join in. But hey, Fred’s great, ain’t he?.

When I was a lad, Boney M were quite a big deal, tra-la-la-la-la. Like Fred, Bobby had inappropriate ‘rap’ tendencies. At the time, of course, we didn’t realise it was largely because he couldn’t (and for the most part didn’t) do any of the singing anyway. Sad to report Bobby doesn’t rap any more. 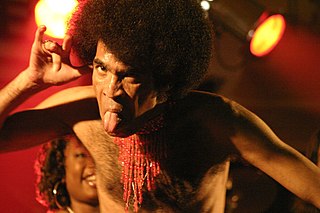 “But who will do the dancing?” I hear you ask. Fear not, luckily, Bez is free. Entertained to see from Wikipedia that darling Bez is a “dancer and percussionist” – if only Evelyn Glennie could dance eh? Anyway, we absolutely most have Bez in our supergroup. His Dad is a Police Inspector, that could come in handy. Obviously, the Happy Mondays wouldn’t have been quite the same without him, I’m just not sure how. 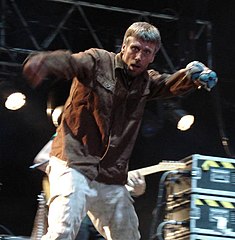 If Kate had Fred, Björk had Einar. I love/loved the Sugarcubes, 1987 wouldn’t have been the same without them. But I was always torn on Einar’s ‘interjections’ – does the ‘rap’ in Hit work? Mmmm… The bit he does in Motor Crash is ok but like all of our collection of “why are they there” mad rapper types – I’m sure he divided opinion.

I can’t find a commons licensed picture of Einar, so here’s Björk instead. Coz she’s lovely.

Who could possibly be the front man and musical inspiration behind this mega-collection of musical interjectionists? There is only one man that could take that job on. You just have to listen to the live version on No Xmas For John Quays to now that he can silence a band when necessary. And this is the particular genius of this band. Having Mark as the front man guarantees no musical output and a live show disaster of epic proportions ( and having tried to see Mark live twice, I know what I’m talking about here ).

And yet, despite the inevitable Motor Crash of music, I look at this line-up with a good degree of fondness, maybe they could get together and jam for a bit and see what happens. I’ll happily stand in for Bobby, I have chest hair.

Can you think of any other members we could add to this magical collective?

( all images are available under Commons licensing )