I wrote this while on holiday lying in bed unable to sleep as I’d eaten too much pasta. So, bearing that in mind, and the fact that I could hear the voice of Geoffrey Palmer in my head as I typed, you can take this with as much of a pinch of salt as you like. Or simply believe that I am this big a curmudgeon. Entirely your choice.

You see old photos of beaches crammed with people. The Victorians, having used the Industrial Revolution to build the railways then used them to escape its grime. A short trip to the coast for a period of fresher sea air and a glimpse of an ankle. You can’t blame them. Their lives must have been tough and most of them, never having seen the sea, would have found it a liberating novelty.

All of this fails to conceal the most important fact, going to the beach is rubbish. The Victorians knew it too. They built piers to escape the sand but retain the view and smell of the sea. This is how any coast should be experienced. Proximity but not immersion. Observation not participation.

There are two main types of beach experience in my life. The horizontal hail of the Scottish beach and the basting of the sunnier, usually foreign, beach. There is an honesty (and often brevity) about the Scottish beach experience. You go, you see, you footer about in a rock pool for a bit, find a dead crab and then take your blue face and hands somewhere warm for tea or a somewhat counter-productive ice cream. You are, at all times, fully/over dressed and wellies take the full brunt of the conditions underfoot.

Not so on a foreign beach. It goes a little like this.

It is 30-something degrees, there isn’t a cloud in the sky and the sea shines like the foil from a million Kit Kat wrappers, scrunched up and discarded in the bay. My blue white body stands out like an albino penguin, the new trunks like a little albino penguin cowboy holster. I kick off my bought-for-the-occasion flip-flops and immediately burn my feet on the sand. It takes years of meditation for the Svengali types to conquer walking on hot coals, I master it in minutes, hopping from foot to foot like a demented desert lizard.

For the first time I say “it’s great this, isn’t it?“. Everyone loves the beach. We’re all descended from Victorians.

I grab the sun cream and apply liberally. The more advanced among you will also have worked out how to slide a garlic clove under your skin and remove the bag of your giblets before flopping yourself onto the cooking towel at Gas Mark 3 for an hour or so (or until your juices run clear).

Make no mistake, this is cooking in all but name. And, much like being in an oven, there isn’t much to do and is quite boring. You could read but your hands are all greasy, there is no comfortable position and the blinding sun makes it hard to focus your drying eyes.

I could listen to music but I risk one or more white lines running across my precious tan. And who wants to be tanned anyway? Who said that was a good thing? People say you look healthier but it all looks like early stage melanoma to me. 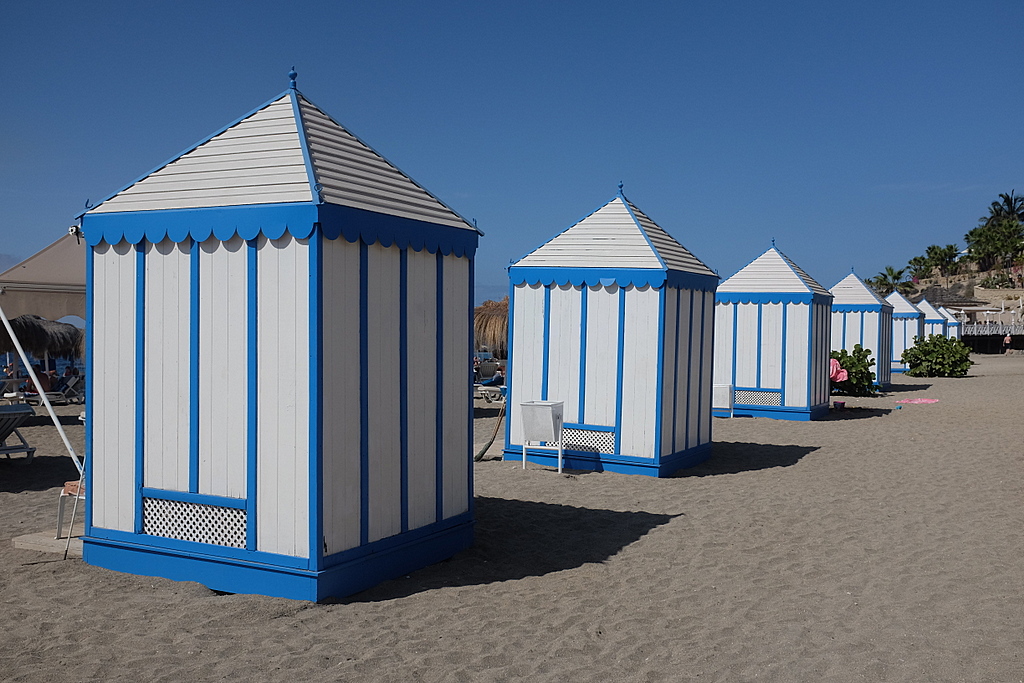 Anti-sun Cabins – I approve of these, you can lie inside in the dark and listen to The Smiths

Beach sports are popular. They are also played on a ridiculously uneven surface that burns the soles of your feet. If Clive James had shown us Japanese people doing that in the 80’s we’d all have laughed and laughed “look at this silly Japanese playing football on a burning hot, bumpy field“. And yet we are compelled to bat balls, fling stuff, kick stuff most often yards from purpose built arenas that might assist with making the sport fun.

I could swim in the sea. But, well, it tastes horrible and gets you wet. This may be self-evident but that wet will a) make lots of sand stick to you and b) wash off your sun tan lotion meaning that, when in the sea, the visible parts of your body are in the oven turned up to eleven (if you’ll allow me the erroneous jump in measure for artistic purposes). I have to come out the sea and somehow get dried with a towel covered in sand, standing in the sand with lots of sand stuck to you. The previously refreshing onshore breeze refreshes the sand as I vainly brush it off. Sand, sand everywhere and not a drop to…

Think. None of this makes sense. Entertainment value – low. Physical enjoyment – lower. Novelty – I am not a Victorian. What am I getting from this? “It’s great this, isn’t it?“. No it isn’t. It’s just another of those mass delusions that strikes humans in the way that it doesn’t actually with lemmings. Lemmings are quite smart. When it’s too hot, they are probably underground, or in a museum.

So, I don’t go in the sea. I don’t try to tan. I find a chair or bed, remain largely fully clothed and cower in the shade. I play music very loud and watch with disdain as the hundreds of people around me slowly broil themselves. I’ve read Camus. I know what can happen. I stay frosty.

People watching can be entertaining but when it so entirely reveals the crass stupidity of your species then it wears off quickly. Bald headed blokes with EDL tattoos try desperately to make their skin darker. People dress according to their self-image and not the mirror variety. Parents sleep while their children burn, fiddling with broken glass and cigarette ends. All that the red tops try to inform you about breasts turns out to be a shabby lie hidden within shabby morals. And still the sand collects. In your shoes, hair, bag, ears. Everywhere. Like rice at a Rocky Horror Show, it fills every available space grinding and chaffing. Abrasion. Choking.

Hours pass. Sweat glistens on sandy crackling skin. I pack up. I empty sand from things only for it to reform like a liquid metal terminator. We shake it from towels into each other’s windswept faces. I rinse my feet under a tap but can’t get them properly clean until I evolve a special third foot to support me as I clean the other two. Every time I put a foot back down it collects more sand but now it’s wet again, soggy, clinging, sand.

The pain from a few uncovered areas foretells a restless, tortured night ahead. I crunch home on the crushed stone of millennia. It’s in my socks now. Thanks Queen Victoria. Thanks Industrial Revolution.

No, no it wasn’t. Beaches are rubbish.