On the Propagation of Truth and Intent in Large Organisations

Truth can be considered an absolute. Logically there can be only one truth but reality is usually very different. In effect, everyone has their own truth shaped by their perceptions, motivations, agenda, understanding. If history is written by the victors, truth can be manipulated in real time.

So, in a Leadership position, how can you really tell what is going on? A myriad of competing truths can appear at your door, what do you believe, who can you trust?

Traditionally relationships built up over time deliver the trust required to allow you to arrive at the best approximation of the truth. This, however, rarely extends all the way down the organisation as you are less likely to have those relationships at all levels.

In the opposition direction, communication of your intent can also suffer the same fate as the truth. Passing through the same filters, intent can be altered to match the desires or beliefs of the person passing it on. Rarely does your word arrive unmolested to all levels. Obviously, communicating directly (by whatever medium) can limit that problem but your still have people nearer the shop floor who can follow up and add their own slant.

The only real observable truth in all of this is that people are complex beasts and therefore the discovery of the pure signal of truth from the noise of rhetoric sits at the heart of understanding your world.

So, let’s try a little thought experiment. Imagine there are three types of manager in your organisation, blockers, modifiers and transmitters. Blockers stop the truth getting to you. Modifiers change it ( or in extreme cases invert it ) and transmitters just tell it as it is. In reverse, down through the organisation, the same applies to the cascade of intent. You can visualise the cascade of intent like a bagatelle game, some people not the ball off course, other people it may just stick with.

Now draw your org chart and decide, honestly, how you would allocate your managers in your line to one of those three categories. 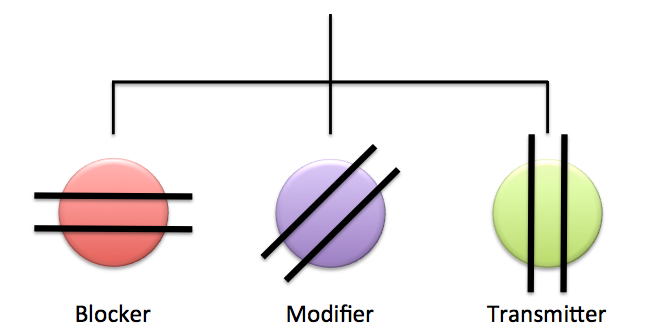 Where you have blockers, you will see your blind spots, places where the truth isn’t getting to you or where the sunlight of your intent doesn’t penetrate.

If you have modifiers, expect that your view of that area may be skewed and your intent confused.

Stating the obvious, the higher up your organisation these people are, the bigger the area of possible concern. Also, the magnitude of the impact may be governed by personality type ( in a similar to what I have mentioned previously with regard to Scale Free Networks ).

Transmitters are your salvation. They make sure you see the truth and they carry your gospel honestly. In fact, the best transmitters become amplifiers and your message arrives louder and clearer with their teams.

Blockers and modifiers betray a simple problem. Their personal goals are not aligned with those of your organisation and they use their position to adapt or stop the flow of information to their own end. This may seem a little jarring and harsh. This it not to say that you will have an army of people engaged in Machiavellian plotting. The changes in the communication of truth or intent may be very subtle, perhaps even entirely subconscious but knowledge and understanding of these variations is perhaps the key to unlocking the problems that are troubling you. After all, it would be similarly jarring to suggest that you naively assume that all you hear is accurate and all you say is followed to the letter.

Perhaps it is best to look at this the other way. In situations where you know you have an issue, can you find anything that would correlate that issue to the theory of blockers and modifiers? Can you see any personal agendas at work?

The solution is as obvious as it is difficult. You want to have as many people as possible transmitting truth and your intent as purely as honestly as possible. Like a magnet bringing iron filings into line, alignment of organisational purpose creates order and harmony.

And, in the end, we all prefer order to chaos.