Social Media Map – On The Death of Cross-Posting

Back in early 2009 I posted what was then my Social Media Map – a visual summary of how I was using Social Media at that time. Later that year I posted a small update to it. Seven years later, it seems appropriate to revisit the picture to see how it has changed. Seven years, let’s pause to think about that for a second, none of this is new any more, when did that happen?

First point to note is that I now have two social media profiles, myself and the mysterious Dark Edinburgh who lurks in the night taking pictures. He’s more popular than me, Superman to my Clark Kent, if you will.

Second point to note is that things have simplified significantly. I’ve only included things that get regular use ( so apologies to G+, Ello, app.net and all the other places I have accounts that I don’t use ) – this means also noting a fond farewell to BrightKite/Twitpic/Twitterfeed et al.

The main change is that I have stopped hooking up services in a flurry of cross-posting. Clearly, back in 2009, I was intent on seeing just how many things I could get to talk to each other as an elaborate internet domino topple. That may have largely been for entertainment but over the intervening 7 years it has become clear that it’s not very useful at all. I do retain some elements of cross-posting for convenience but only where it doesn’t compromise the content.

Here are the updated maps with some commentary below. 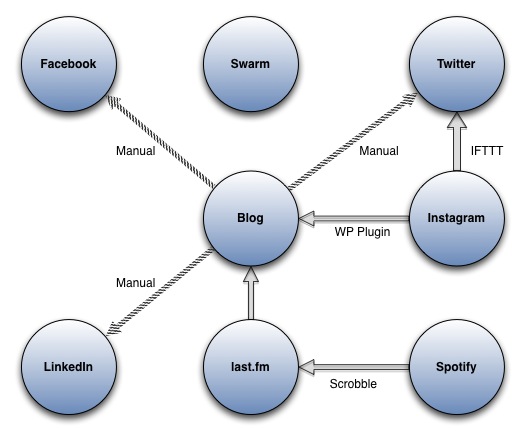 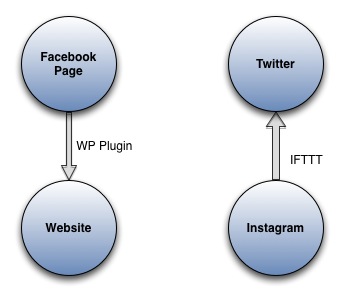 So, what have I learned in seven years, in no particular order:

And a few thoughts that relate to Dark Edinburgh:

Back in those crazy early days of Social Media I was intent on trying everything out. As it has become a more business as usual thing, it has settled down to a smaller core of things that I do and this has brought a lot of simplification with it. Many things have come and gone over the intervening 7 years and I expect it to always change.

The interesting thing for me to to continually reassess why I am doing something (other than blind habit) as it gives a clue as to the underlying reasons for the existence and use of Social Media – as opposed to simple technology tinkering as it was in 2009.

I wonder what it will look like in 2023? Come back in seven years to find out 🙂