Following on from my recent spate of clip posts, I’m going to go for a Top 10, thus propelling me nearer to the top of the “Blogs with an editorial style close to Channel 5” charts.*

So, inspired by a chat on the way home with Stu the other night, I decided to work out what my favourite foreign** films. I’m not claiming this to be the best ever, more my favourite. Which is why you won’t see the habitual list faves like Kurosawa/Truffaut/Goddard. Just not my thing. Maybe one day.

There are a few films that are filed under “Nearly Made It”. Betty Blue (37°2 le matin) might have made it for reasons of student nostalgia and nakedness but, having watched it again recently, think that it doesn’y quite hang together. Amélie (Le Fabuleux destin d’Amélie Poulain) is (and looks) lovely but maybe a little too quirky. I had a very lovely birthday the day I saw Crouching Tiger Hidden Dragon (Wo hu cang long), it looks lovely but on repeated viewings all that flying about starts to look silly. A final word for The Host (Gwoemul), its just good fun. No harm in that.

There is also a pile of DVDs still to be watched like Oldboy, Festen, Hidden that might have made it. Maybe one day.

10. Germinal
OK, I’ll be honest. This isn’t a truly great film but it makes it into the list because of the book and the fact that it is a very good attempt at a very difficult book to film. As with any film like this, the natural abridging leaves anyone who read the book first a little at a loss. That’s why I thought the Lord of the Rings films were fine. I didn’t know what was missing. But with Germinal, it was the bits that were missing that stood out.

That said, the grimness, the poverty are all come across powerfully. Although I’m compelled to say Jeunet would have done it better (more of him later). And talking of later, this isn’t Gérard Depardieu‘s first appearance in this list. 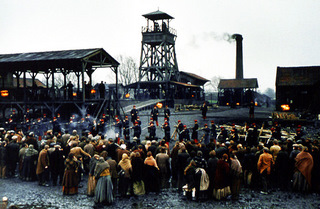 Trouble at mine
I don’t know if its the film or the subject matter that are unappealling but this is still missing from DVD, which is a shame.

Everyone should experience at least part of Les Rougon-Macquart and this is a very good place to start. Although this post has led me to find the DVD of La Bête Humaine, which I’ve just stuck in my LoveFilm rental list. Nice. Best ending for a book ever.

9. La Reine Margot
Isabelle Adjani, amazing visuals/production design, what’s not to like? It looks great, it pulls no punches it in brutality and makes it into my top 10 because these things make it very memorable. I suppose you have to like period pieces and perhaps 16th Century French history isn’t for you. But I’ll say it again, Isabelle Adjani is in it. 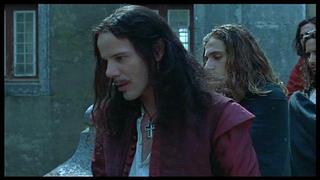 Best we don’t discuss the moustaches

8. La Heine
La Heine is the kind of film I don’t normally like. Bit modern, bit purposefully gritty but it all works well. Insightful, shocking and all shot is an ultra-vivid documentary style. Love the soundtrack too, something about French hip-hop I love in a film but which I can’t really listen to otherwise (like the Taxi soundtrack gathering dust somewhere).

“See me, ahm no’ happy”
It’s shocking at times (but not in a crass way like the truly abysmal Baise-Moi) but it all works. Its the sort of film the British do very well, you could easily imagine Gary Oldman being in this film and going a bit nuts.

7. A Very Long Engagement ( Un long dimanche de fiançailles )
OK, so when I mentioned Jeunet earlier you were all expected Amelie, right? Well, more of that later. But this film is a worthy inclusion in this list for one very, very simple reason. It looks stunning. Every moment, every frame is a work of art. And me with me photos and that, I’m a sucker for that. 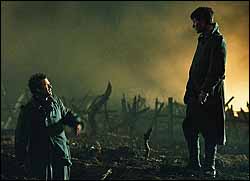 Attack ships on fire off the shoulder of Orion
OK, so maybe its a bit of a sweet, poetic tale of love etc etc. Don’t care. Did I say it looks amazing?

And yes, that is Jodie Foster acting in French. She does Latin too, quid quo pro, very talented.

6. Delicatessen
That man Jeunet again. So we’ll forgive him for Alien: Resurrection. The reasons why this is film is great can be summed up by its plot keywords in IMDB, Surrealism / Metaphor / Dystopic Future / Black Comedy / Cannibalism. Come on? How cool is that? Imagine Black Books, if Dylan Moran killed Bill Bailey and fed him to Tamsin Greig, all directed by David Lynch. Oh yes, you betcha. 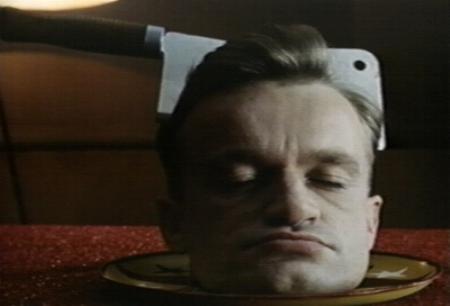 Bring me the head of Mark E. Smith

5. Pan’s Labyrinth (El Laberinto del fauno)
Spotting the common threads yet? Bit sad, visual feast, creature with eyes in its hands? This has it all. At its heart, just a very sad story of a young girl living fascist oppression and a brutal stepfather. That would probably do it for me but this film is most remembered for the lavish creations of the girls fantasy world. Very lovely indeed, won Oscar for Art Direction, say no more. 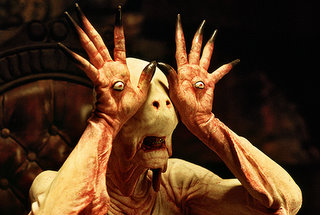 Here I come, ready or not!

4. Life is Beautiful (La Vita è bella)
Very sad, visual feast, sadly no eye-handed creatures. It is unbelievably hard not to cry at this film. Not in a wrought Dancer In The Dark way, you don’t feel manipulated. This film tries at all times to keep you uplifted. Despite the horrors unfolding, what this film does is teach you a solemn lesson in unflinching optimism. You find yourself thinking “well, if he can be cheery through all that, what am I moaning about?“. Joyful. All together now “Buon giorno, Principessa!” 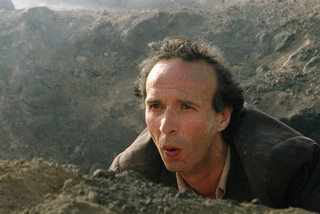 Ooooh, Betty!
(I know these keep getting funnier)

3. City of God (Cidade de Deus)
You knew this would be here somewhere. From its opening moments it grabs you and throws you about the cinema. Looks great, sounds great and with the dizzying claustrophobic scene in the club, really achieves a major assault on all the senses.

You can talk about the realism, the unknown actors, the trueness of the story and cry “oh the deprivation” but that will always serve to hide the facts about how well this film is directed and put together. Watch closely. Its a marvel. 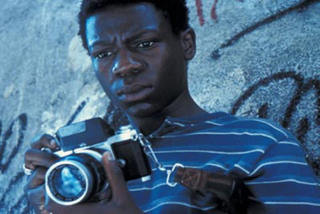 All the nice boys want to be a photographer
What is most exciting is that Fernando Meirelles is directing the film adaption of Blindness (will probably feature in a future Top 10 books if Channel 5 commission it). To say I’m looking forward to it is an understatement. Hope there is a creature with eyes in its hands.

2. Tampopo
“Marjory, pass me the crayfish, I’m going in.”
I love Tampopo as much as I love food. And that about sums it up. A film about a noodle shop shouldn’t make it this high in the list but it does for several reasons. Its a feel good film, its fun, its quirky, amusing at times but very focused on its central point. The joy of food. There is doubtless an element of nostalgia for me. I first loved this film many years ago and it has stayed with me for 20 years or so now. It hasn’t lost much in all that time and, as I type, I’m very keen on watching it now. 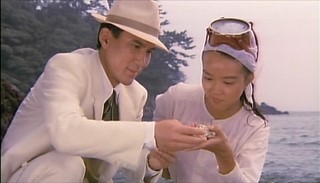 A lump of purest green

1. Jean de Florette/Manon Des Sources
OK, so you saw that coming. And now you are complaining that its two films and I’m cheating. Well, it isn’t two films, its a long one chopped in half and if you’ve only seen the first watch and were either a) enchanted or b) saying “rabbits, eh?” you’ve entirely missed the point and you’re an idiot. It’s like never having seen The Return of the Jedi and wondering why Vader “seems a bit off on occasion“.
To return to the point from the beginning, L’Eau Des Collines is a great, if simple, story and these films bring it to life perfectly. 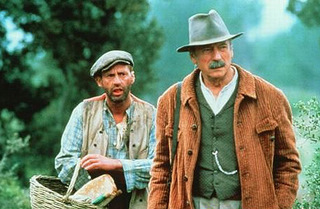 Now that’s a ‘tache
OK, so Emmanuelle Beart gets a bit naked for a while, that is far from the central draw here. The visuals, the music, the story, it all sits at a perfectly lazy pace. Watch them back to back, its a marvellous way to spend an afternoon.

* come back later tonight, there might be boobies
** i.e. not in the English language or “bloody subtitles, no way!” as my Dad would say