As I start this review, I know from the outset that I will almost certainly fail to convey what it is like to watch or, indeed, why you should watch it. I could fall back on something straight forward like “if you like Kaufman’s other work, you should watch this“. There is another lazy option which goes “if you haven’t seen any Kaufman, don’t start with this, watch Eternal Sunshine first“. But I won’t leave it there, I’ll give it a shot.

I suppose the reason Synecdoche, New York is hard to review is that, as I watched it, I knew I was enjoying it; it was just never obvious why. That means that you can’t just do a list of cool things and say “watch it” at the end. Which is what this lazy reviewer likes!

The subject matter seems straight-forward enough, a theatre director battles with work and women while he stages a new play staged inside a model of New York in a warehouse. This is Kaufman, it’s not that simple. If I left it there, you’d perhaps shrug your shoulders and wander off to watch Transformers. But don’t. Bear with me.

Firstly, the acting is superb. As ever, Phillip Seymour Hoffman is ace and is ably supported by the rest of the cast, Samantha Morton is particular. As he ages and his health worsens, you really do feel everything that is happening to him. Which is why I can’t quite understand why someone insisted no trying to label this film a comedy. I know why they’d want to do this, but really, have a word with yourself. That’s not to say there aren’t light-hearted moments but I’m sure that marketing gang had a fit at the initial screening; comedy this isn’t. 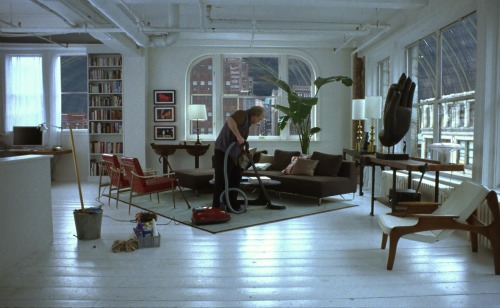 Hoovering, it's a philosophical thing

Like other films I have reviewed here ( like Haneke’s Hidden and The White Ribbon ) what makes this film stand out is the extent to which it lingers on the mind. Even now, hours after I watched it, I’m still wondering, it’s still making me think. I suppose you could even say that I was unsettled by it. There are obviously strong philosophical overtones running throughout, none of which I would claim to understand all that well. As an example, the main character is called Cotard, named after the Cotard Delusion, a condition that makes people think they are dead or, at least, don’t exist. And it is the question of existence and what that means that permeates the film throughout. I’ll resist the temptation to disappear any further into my interior at this stage.

The play itself is a typical Kaufman device that allows another kind of delusion to be explored. It allows the characters to see themselves being played by others which gets increasingly surreal that nearer the timelines of the play and real life get closer together (and, at times, cross).

By way of scoring other lazy reviewer points, I’ll add that this film sees Kaufman stray far closer to David Lynch territory than before. So, if you liked Inland Empire…

With regard to the Blu-Ray question, the film has quite muted visuals throughout. The print is generally very good but it’s not a must-see on Blu-Ray, the DVD print would be good enough I’m sure.

If you’re prepared to be challenged, entertained, a little confused and perhaps a little unsettled then you really should watch this film. My final words of praise are simple. I’m going to watch it again soon.