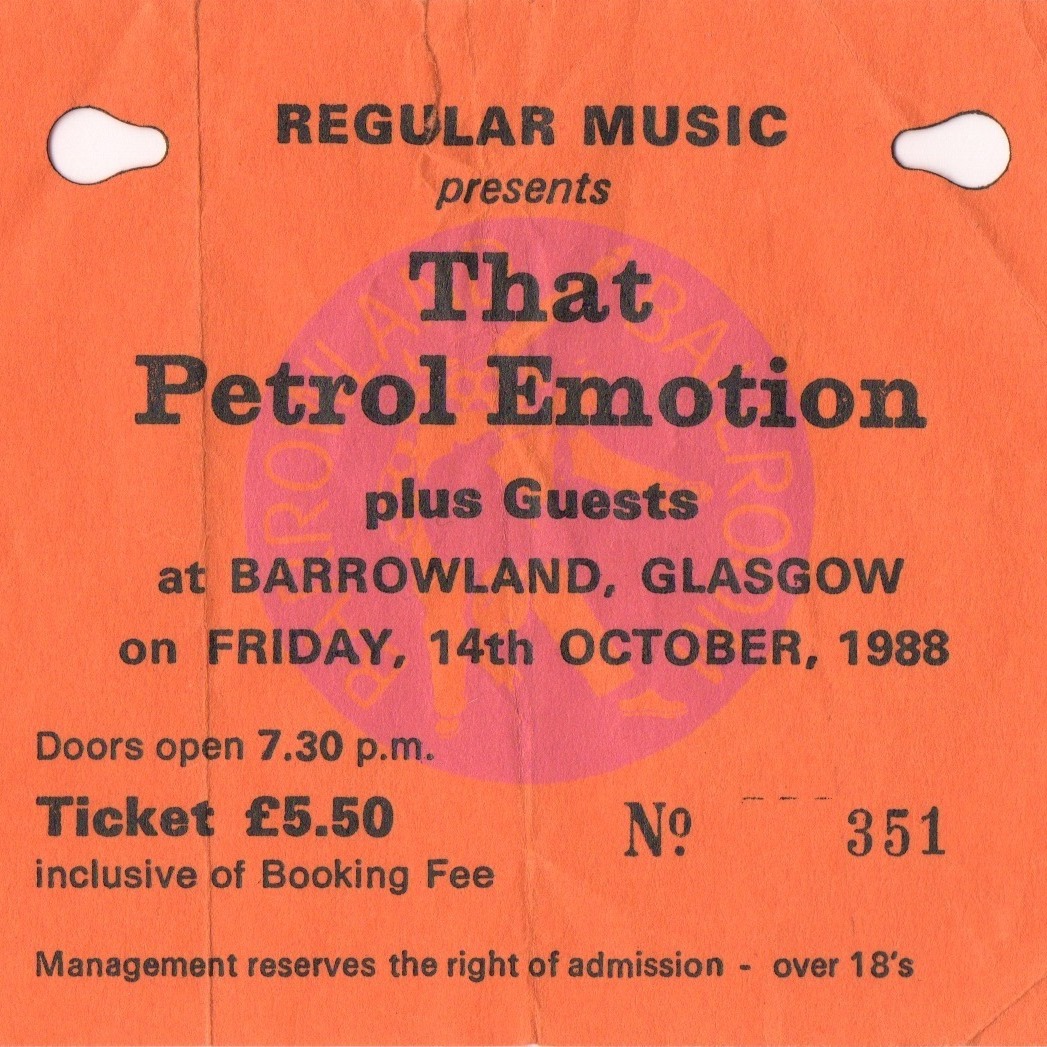 I wouldn’t claim to be a live music aficionado. I’ve been to a fair number of gigs over the years but I know people who go to a lot more. I’ve never even been to a festival. I have seen Showaddywaddy live though. I wasn’t at that Buzzcocks gig. I never saw The Smiths.

Following the sad death of Prince I remembered my favourite ever live music moment which made me think of others – here collected for posterity for when I can no longer remember – or to convince future generations that I was cool/uncool (delete as appropriate) once.

A few things that didn’t make the cut include that time a bloke flew out the crowd unconscious at a Half Man Half Biscuit concert at King Tuts, every time I tried to see Mark E. Smith do anything live other than get drunk and disappear, the truly awful New Order gig at The Playhouse in 1986 and, of course, the Muse incident.

Back in 1987 I was a sponge with big holes. Every type of new music, influence was allowed to pour in so, when the Reid’s appeared on the stage on The Tube and started barking at the – presumably – bemused crowd I was instantly hooked. I saw them in Edinburgh shortly after, they came on stage at the venue with their tambourine and maracas in a black Adidas hold-all – it was rock and roll in all the right ways. It was every bit “we don’t give a shit” as the Sex Pistols. And it was practical, how else do you carry a tambourine?

Their first album, This Is The Story was released soon after. I was in 6th year at school, so with sufficient free time and a city centre school I was able to nip down to HMV and grab a copy as they were taking it out the boxes and onto the shelves. It may have been the same day, not sure, but soon after they played a small gig in the same HMV shop late-ish afternoon. I wondered down after school and stood at the front in my school uniform looking, despite my awesome quiff, not all that rock and roll. It was great. And, I’ll tell you a wee secret, they spit a lot. Back-lit, the little flecks of spit looped over the mics and sprinkled me and my school uniform with a soothing shower. It’s still one of my favourite albums, I can scream every word, play most of it on the guitar. Thanks lads.

I’ve seen Turin Brakes live four times now and it is never not an absolute joy but it will be very hard for them to beat the first time I heard them play Long Distance live. It is my favourite song of theirs and simply one of my favourite songs. They can always make all their songs sound great live and I was not disappointed. Now *there’s* a river…

A special mention to the performance of Black Rabbit the last time I saw them at La Belle Angele – wall-of-sound-tastic.

This one is a bit hazy. It was in The Venue in Edinburgh around 1986/1987. We were all into Andy White and played “Rave On…” all the time. I did once send Stu a card that said on one side “Things Start To Unwind” ( really, I was that cool/uncool – delete as appropriate ). To make it even better, it was written in Letraset. I loved Letraset. Does that answer the cool/uncool question? I digress.

Things I remember about the gig:

Now, the Bobby Gillespie thing. I’m pretty sure that happened. I’m pretty sure it was that gig. But it might not have been. There were a lot of gigs then so there is a lot of apocrypha to choose from. Let’s just say it’s true, it might offset some of the lower opinion introduced by the whole Letraset thing.

I think I’ve seen Radiohead three times, maybe four. There is always great moments – the first time I heard them play There There live – and less good moments, all the weird slow stuff that shouldn’t be played live. The best moment of any Radiohead gig is always Karma Police. Everyone sings along and for a minute, everyone loses themselves. Always lovely.

I think I saw TPE maybe five times and this was my favourite by far. We knew someone who lived nearby so went properly prepared. No jackets, t-shirts, empty pockets, ready to go. And we pretty much danced for the whole gig. Things I remember: 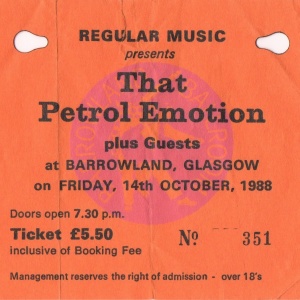 I’m not much of a mosher – but I went for it that night. I remember coming out into the night, steam coming off us all.

I never knew how much I loved Suede until it was too late to see them live. Dog Man Star became my favourite album gradually. So one day I woke up with a lost love. And then they came back. And my wife bought me tickets and we all went to London and it was amazing. My son (who went with me) was bemused. They played Animal Nitrate, I went nuts. They played Flash Boy, I went really nuts. And during Metal Mickey I may have lost in entirely. It was good to be alive. Literally. 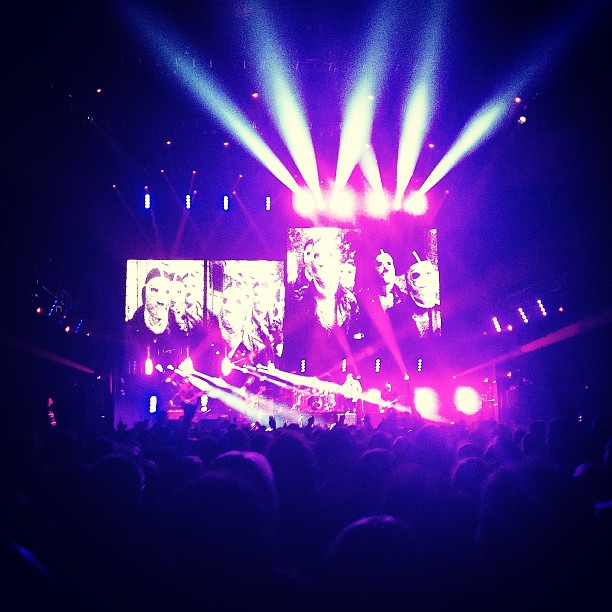 Yeah, so what if they’re not the coolest? It was a joyous moment. I’ll explain. The Canadian popsters were all about fun and they were at their most fun playing live ( less fun when falling out and leaving the band etc). At some point in the gig, they got one of the wee, shelpit Glasgow security guards up on stage in his ill-fitting hi-vis coat and he stood on the stage looking small and high visible. They talked him through a strumming pattern on the guitar 1-2-3, 1-2-3,4, 1-2-3 — 4-5. He practised a few times and then, with one of the band playing the guitar’s left hand, he strummed his way through Smoke on the Water. Only, as soon as he started, the entire band came crashing in around him. You should have seen the look on the wee guy’s face. The whole place went absolutely bananas. Just lovely.

Polly Polly Polly. Oh Polly. You wore a spangly silver dress. You had a lovely red guitar. You sent the rest of the band away so we could be alone. And there you stood, on your own in the middle of the stage singing Rid of Me just to me. We had a moment, I know we did. Lick my legs…

With a special mention to a Primitives gig at the Glasgow Arts School were Tracy Tracy similarly couldn’t take her eyes off me. Probably.

I was lucky enough to see Prince live four times. The first time was in Manchester at Maine Road – I think it was sometime in the late 1980’s. You remember the first time you see Prince. Wow. I had spent quite a bit of time learning to play Purple Rain on the guitar. It has a nasty chord change from F to Eb(something weird) – I practiced, I could nail. Prince didn’t bother, because he was Prince, he just played Eb, like “It’s my song, I’ll play what I like”. It was dark, the crowd sang, I think it may even have rained. Well, it was in Manchester.

It don’t really do star-struck flabbergasted or otherwise speechless. I got through meeting David Attenborough, Iain Banks (and Prince Harry?) without clamming up. But that night at Meadowbank, Prince played Sometimes In Snows in April on his own on the guitar and I was entirely blown away. It’s hard to explain. I’d seen good guitarists before, I’ve seen Buddy Guy take a broken string off while still playing, I’m seen John Williams from Sky live ( cool or uncool? “Songs from the Letraset Generation” ) – but I hadn’t seen anything like this. Its not just that he could play, its the way that playing and performing melted into one. It was simply astonishing to watch and, I suspect, I’ll never see anything like it ever again. But is does make for any easy choice at number one. Nothing else comes close.

Obviously, as I was writing this, lots of other stuff came to mind, The Specials, The B.52’s, Johnny Marr on stage with The The, but I’m already at 1500+ words and there is very little chance you made it this far, so they’ll have to wait for now!