Almost 10 years ago I registered terraexitus.com and now I’m delighted to say that a very old idea has finally become a very new book. I had to get the domain first for reasons that will be obvious if you read the book. It hasn’t taken 10 years to write, it’s a short book and sat going nowhere for a long time.

You can trace the stuttering progress herein as I bemoan my lack of progress and the original genesis and the traces of doubt.

For a good while I didn’t really know how to write it, wasn’t sure if a I could and, inevitably, life, work, stuff got in the way. I spent a good while starting what will perhaps become a fourth book, Capricornus – that sits stopped at 15000 words waiting to get picked up again – but I had to set it aside to get this story out the way. It felt more important to me so always got in the way of my thinking. It may not be important to anyone else but it planted deep roots and wouldn’t go away.

One of the main issues was tone. For reasons of youthful obsession, my ‘natural’ writing style has ended up quite a bit Douglas Adams. I had to fight that when writing The Beatle Man but had to stop it entirely when writing Terra Exitus, it just didn’t fit.

Anyone reading it hoping for a follow-up in the style of The Beatle Man may end up with a face like a Radiohead fan the first time they heard Kid A.

So, while my instinct is to go for “The ships hung in the sky in much the same way that bricks don’t.” – I had to go something more like “The ships sat silently waiting to destroy earth, the people screaming from below desperate for their misery to end.”

I exaggerate. Or do I? And I didn’t entirely remove all vestiges of Douglas Adams either – you’ll hopefully see what I mean.

What made it happen was a period of work where I was travelling a lot and the book was almost entirely written on IAWriter on planes and assembled in Scrivener – via a trip through Dropbox. Scrivener is a lovely thing.

I think the record was about 1400 words on a flight home from London. There is nothing like writing on the Red-Eye to London to deliver a flat tone to your writing. 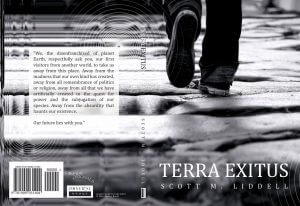 I was very pleased that Obverse Books were prepared to pick it up and take a risk on a book that may not be all that natural for their core audience but, I guess, that’s what Obverse Originals is for and it is to their credit that they are prepared to try new things.
One thing is for sure, I’m very proud of it. I understand that it may not be for everyone, but it is pretty much what I wanted to write. It flexed a little over time but is fundamentally the same idea I had 10 years ago.

It is good to get it finally done, it’s good to know I can stick with something over 10 years and ultimately get there. And I’m going to try and ride that wave so that the third book appears a little sooner than 2026, maybe 2025. The joy is that the flat tone is gone and I can go back to being a poor Douglas’ Adams clone again.

So, Terra Exitus, finally done. You can join in at www.terraexitus.com – which, in itself, isn’t much of a spolier – about time someone visited it, it has been there a while and, of course, you can pre-order/buy it from the Obverse Books website.