To my surprise, this blog is now 10 years old. We shouldn’t be surprised by the passing of time but we always are. It’ll be 11 years old next year, can you imagine?

The surprise comes in a number of forms. It sounds a little odd that something as new and happening as “blogging” could have existed for that long. It is perplexing that I am now old enough to have been blogging for that long. Above all, it is massively surprising that I have stuck at it for that length of time.

As the very first post suggests, I never really had a plan for this blog. And, to my eternal credit, I have stuck to that core vision. I write things when I think of them, I post some pictures, some posts end up popular, most get ignored. And yet, despite this haphazard and ill-focussed approach, this blog is now over 174K words. That’s over 4 times the length of my latest novel – which you should buy – it’s ace, really 🙂

This blog started life on Blogger on the URL scott.liddell.com and was crudely integrated into an earlier incarnation of this website, thankfully stored for posterity by the Internet Archive. 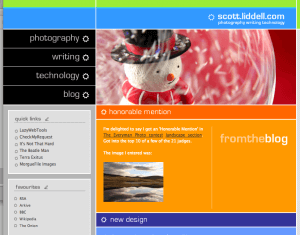 It was quite bright in those days

I eventually got this domain from the joker in China that was squatting on it – was he really hoping someone was going to pay him richly for it? – and moved the blog across.

Later on, I ported it to WordPress and did the usual WordPress thing of spending more time picking a theme than writing any content. I did consider a change of theme to mark the anniversary, but this blog is full of lessons on why that’s a bad idea.

To mark this occasion, I thought I’d asked myself some questions in a weird, self-indulgent interview format.

So, Scott, what have you learned from blogging?

Thanks for the question, erm, Scott. What have I learned? Well, I’ve certainly confirmed a few obvious things. People are interested in good content. On the few occasions I have succeeded in coming up with good content it has been and has stayed relatively popular. My Powerpoint post still gets a lot of hits 7 years on – ( and even makes it into University courses ) I really should do another one, but, well, y’know.

I’ve also learned a lot about securing WordPress sites. This blog continues to get attacked almost daily and, fingers crossed, they’ve not got in for a few years now – that wasn’t always true – I’ve had to unpick a lot of mess. Including the time I discovered I’d been hacked while in Phoenix, Arizona – that was fun. And hot. Hummingbirds buzzed as I tried to login to the server via dodgy hotel wi-fi.

Has it made you any money?

No, don’t be ridiculous. I think I maybe had ads once but no one clicks on ads. Especially if they’re not actually on your site. I don’t even think anyone has ever bought one of my books from the links on the right, can’t be sure of that though. Obviously, that could change any minute now. This is what passes for marketing in my world, passive aggressive italics. Is it any wonder I still work for a living?

But surely that’s a massive amount of effort for no return?

Yes. Thanks for pointing that out you heartless swine.

Are you going to continue?

Why, clearly no one cares?

I started this blog with no sense of where it was going. It had no sense of purpose or direction 10 years ago and yet it has lasted for 10 years and is >174K words. On that basis, without having a plan it has become my most significant body of work *cough*. I’ll continue because I only really write it for myself. It’s a place to empty thoughts into rather than routing everything to /dev/null.

Maybe one day a descendant will stumble across this and take a very dim view of me. That will make it all worthwhile.

You’re not much good to me alive are you Turkish?

Have there been any highlights?

My experiences with blogging led me to write a wee bit of comedy about a blogger that has the sudden realisation that he is simply talking to himself. It was published in the NewsBiscuit book. I got £50 for that.

I thought you said it hadn’t made you any money?

Yeah, well, I forgot about that until you asked. And anyway, that money wasn’t directly from the blog so I was still right. Smart arse.

Getting hacked was no fun at all. Sometimes I’ve written something that I’ve thought was great and literally no one has noticed. But you get used to that.

‘X’ is a terrible title for a blog post from an SEO perspective, have you learned nothing?

Do you have one piece of advice for someone who wants to write a blog?

Are you happy talking to yourself? Crack on…