Why the Fuji X100S is the Perfect Travel Camera

Before my recent trip to Prague, I spent some time deciding what camera gear to take. My usual default would always be to take the 5D and at least 3 lenses and squeeze the 8kg or so on as cabin baggage on the plane.

Obviously, the 5D is an awesome camera and, with my two main L lenses, I’d expect to get some decent photos. But when you’re on a city break, you expect to do a fair bit of walking, eating out, maybe drinking out and, past experience has told me that lugging it all around for hours takes it toll. When I did that for a day in Blackpool I was pretty tired by the end of the day. So, given my new found love of the Fuji X100S, I decided to risk it and go with only the gorgeous little fixed lens camera ( and spare batteries ) and see what happened.

The conclusion was pretty clear cut – the Fuji X100S is the perfect camera for travelling with and, specifically, a city break. Other cameras may get close, but I can’t imagine they could really exceed the performance across the board. Sure, other small cameras are available but they ain’t this good. Here are a few reasons why and some of the shots I took.

You can see more here and here.

The Fuji X100S takes amazing quality images. No question. So not lugging a DSLR doesn’t require that you compromise on image quality.

The photo below was, obviously, taken on an iPhone… a rare appearance herein from yours truly. 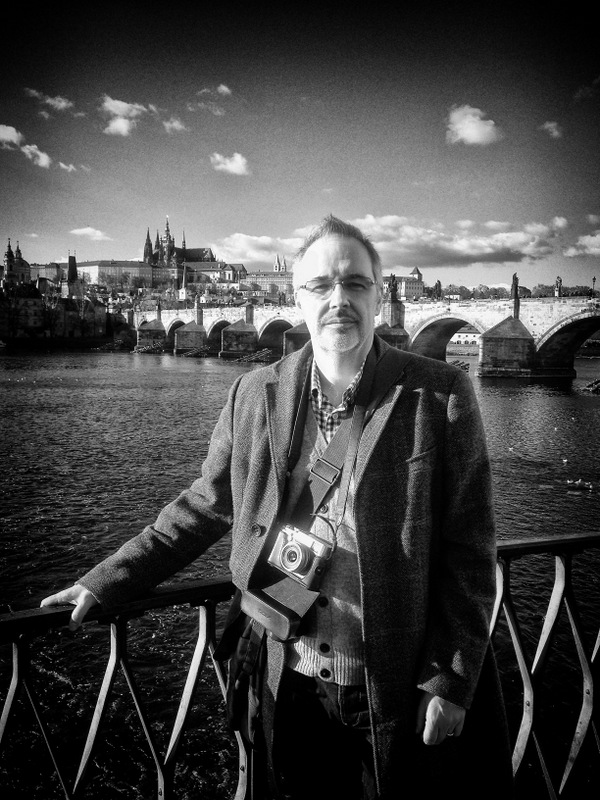 Ageing Hipster in Prague with Charles Bridge Behind

Despite what you may think I look like in this photo above, the X100S is an eye-catcher. People notice it. Quite often random people ask you about it. I have had more random conversations in the street about that camera than for any other reason. Yes,  you may be required to have more hipster chic that you are prepared for but, hey, why not, everyone deserves to be cool sometime. 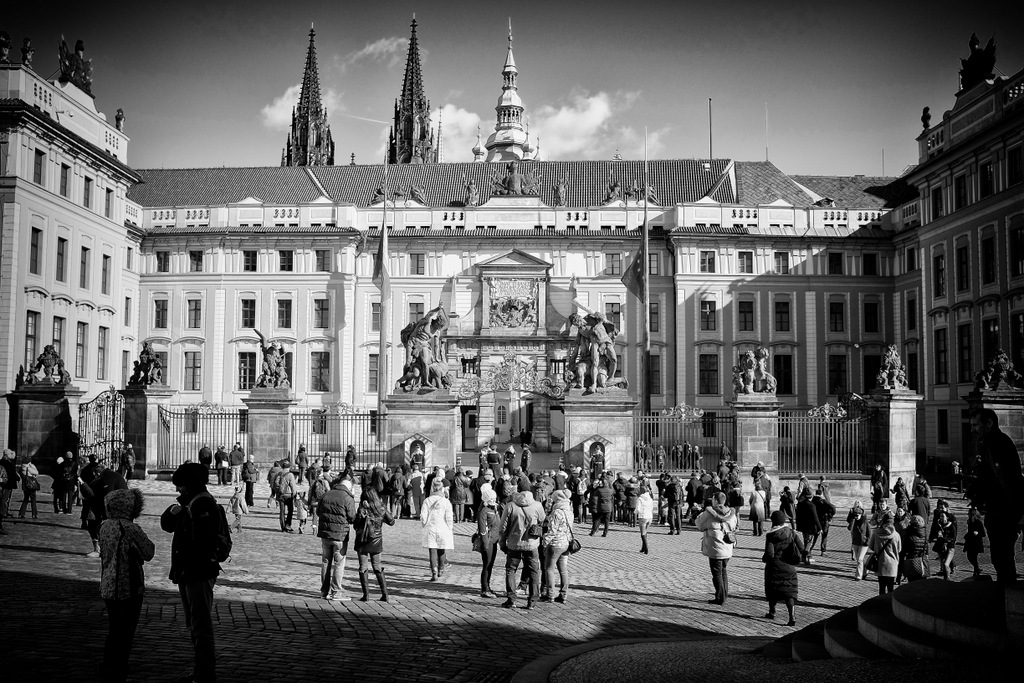 With a small and silent camera, you feel a lot less concern about getting in people’s faces to take images ( as you can see in the some of the street images ). With a DLSR, you always feel that you are looming at people and the clickety-click of  the shutter gives you away. 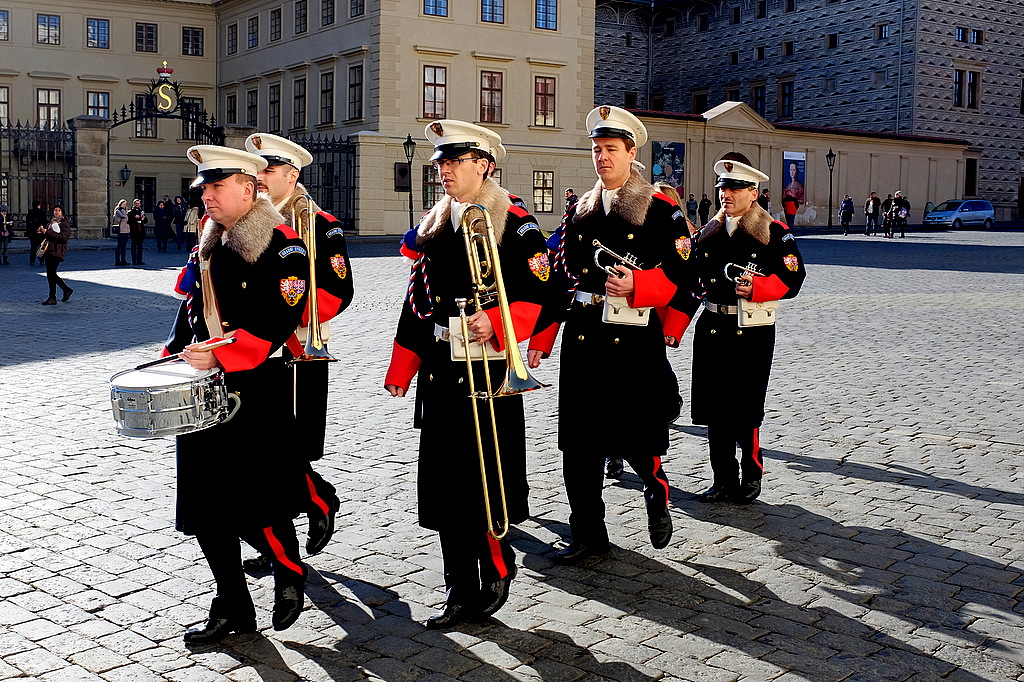 The Band On Their Way To Prague Castle

You can be forgiven for thinking that the lack of zoom would be a problem. The truth is, it isn’t really. Sure, there were a few shots that, had I had my 70-200mm telephoto, I would have snapped but I never really missed it. The fixed lens makes you think, makes you find good shots rather than stand still and hope you can zoom your way to something. Also, because of the size and quality of the captured image, you can still effectively zoom by cropping in post-production and still retain a decent sized image. 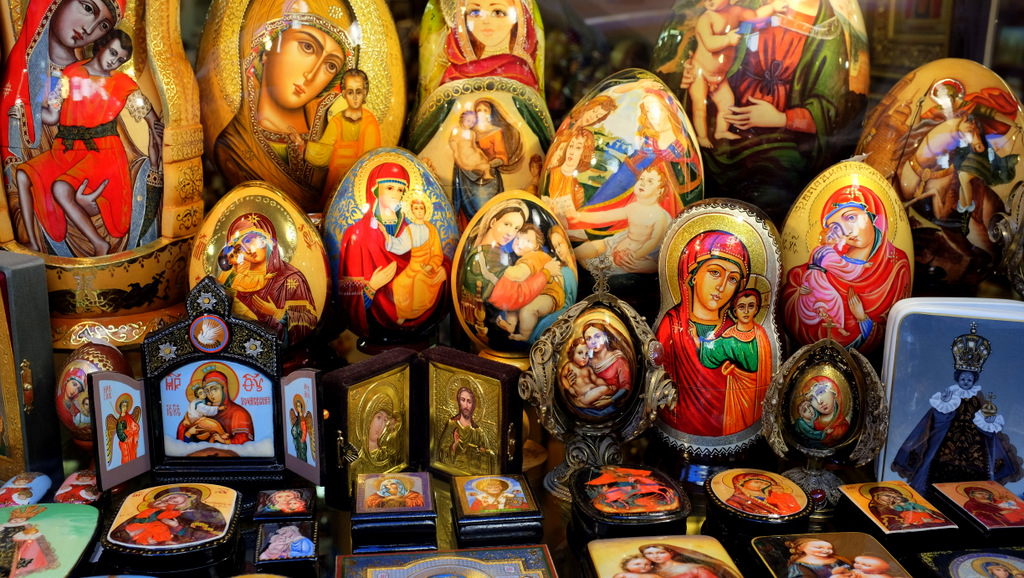 Yes, other small cameras are available – but when you are squeezing round the top of the Clock Tower in Prague you are very glad that you’re not trying to squeeze through tiny spaces with a big ruck sack on your back ( as I did going up the Bell Tower in Bruges ). With the X100S you can get to the top, move about and get a good photo. 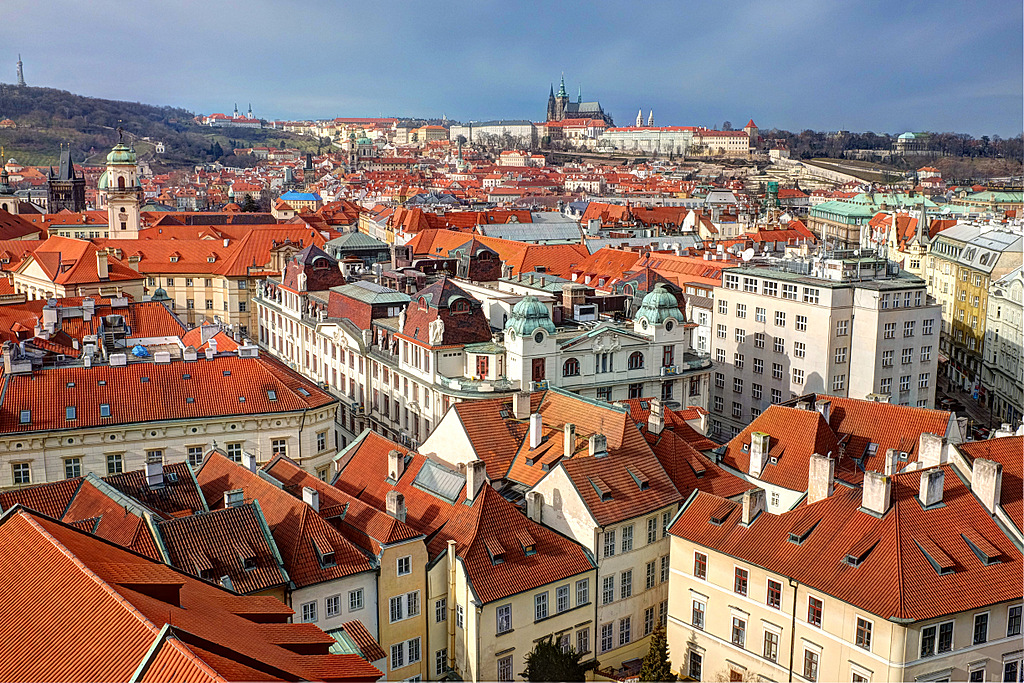 View from the Clock Tower

The 23mm lens on the X1o0S is wonderfully wide when walking about a city. You never really get that far from anything so you need to be wide enough to get stuff in. Or, as in the shot below, you want a bit of near and far, you can do that too. 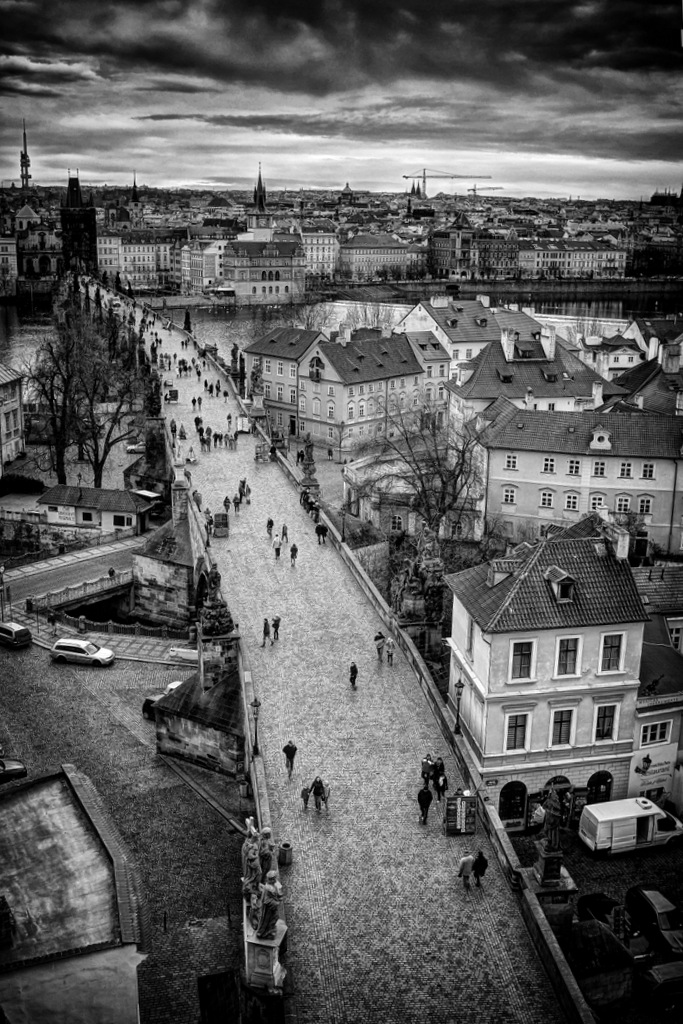 View of the Charles Bridge From the Tower at one end

I saw a lot of people with DSLR’s in Prague and I bet after a while they were flagging. Ok, an entry level Canon and 18-55mm kit lens aren’t mega-heavy but when you need day long endurance ( and you’re a bit old getting with dodgy feet ) the  lightness of the non-DSLR solution to photographing a city is an absolute joy. I walked for miles, I climbed towers, I sampled local produce, I didn’t get tired out and, if you want to take pictures of stuff in a city, you need to be upright and on the move. 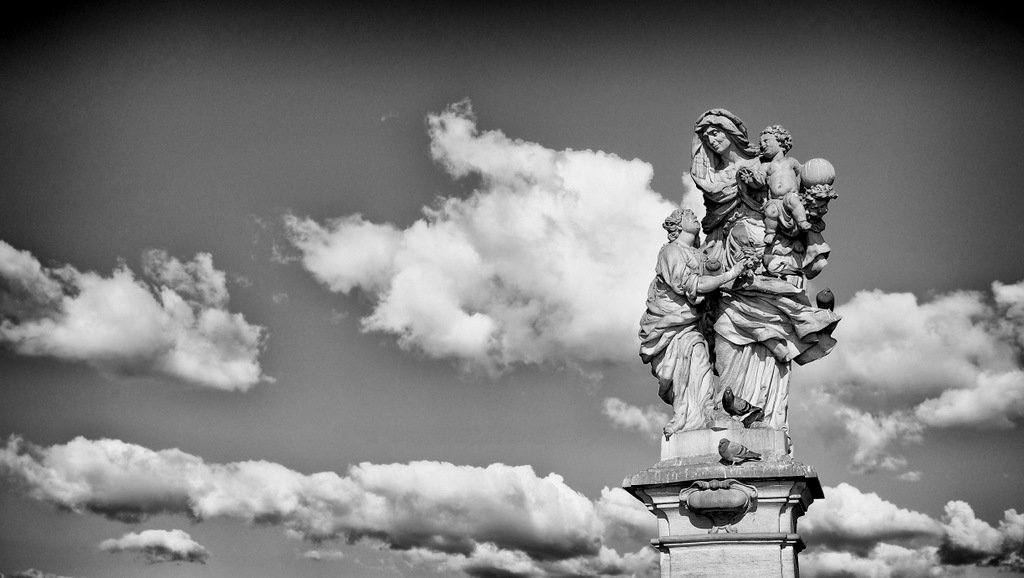 Statue on the Charles Bridge

On a city break, you will inevitably be out and about at night and here I’m absolutely convinced that the Fuji X100S is actually better than my 5D. I don’t use the 5D for Dark Edinburgh any more, when I took both out one night, the 5D got nowhere near the X100S (which can pretty much shoot in the dark). Also, not lugging a huge bag to restaurants, organ recitals or, ahem, cocktail bars is a positive joy too. In fact, you are more likely to choose the leave the DSLR in the hotel at night. Not so with the X100S. 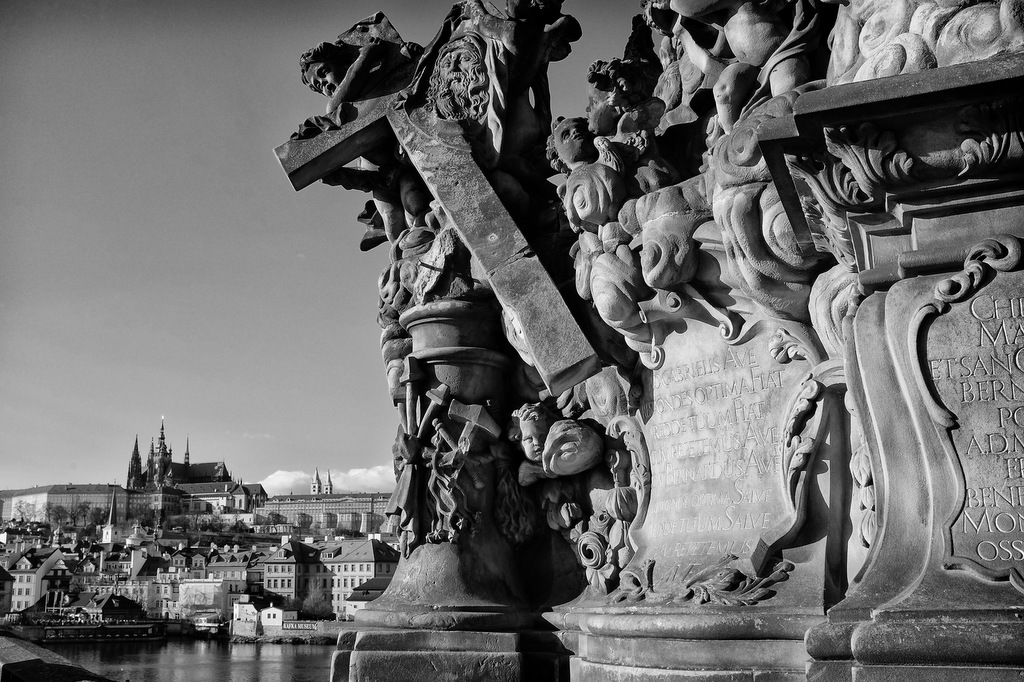 Castle seen from the Charles Bridge

The conclusion is simple. I’ll never take the DSLR on this kind of trip ever again. Longer holidays, holidays in cars or where I’m more static, sure, I’ll lug it. Every other time, it’s me and the X100S all the way.