On 12th April 1981, I was an 11 year old boy. I sat an watched in awe as Columbia made the maiden flight of the Space Shuttle. It looked not entirely unlike this.

The coverage of the launches in those days wasn’t quite as sexy as it is now. You got the whoosh up into the sky for 90 seconds or so and that was about it. None of the on board camera showing external tank separation and the like. Even so, it left a very strong imprint on me.

It seems pretty certain that that moment was the beginning of my mini space obsession and ultimately led me to go back and become a bit of an Apollo buff. And yet, it isn’t lauded anywhere, in popular culture at least, anywhere near as much as the events on 1969. You can perhaps understand why but, yet, the significance and engineering achievement cannot be understated.

I remember the first landing too. I was outside playing football and my Mum shouted out the window to tell me the Shuttle was landing. I got some odd looks as I sprinted up the 28 stairs. In many ways, the landing was a lot cooler than take-off. I’d seen the whole rockety lift-off thing before, but something coming out of space and gliding down to the ground was something else entirely. It just seemed like an implausibly tricky thing to do. Obviously, having read all about the landing process, I’m probably even more impressed than I was then. ( Terminal Area Energy Management anyone? ) 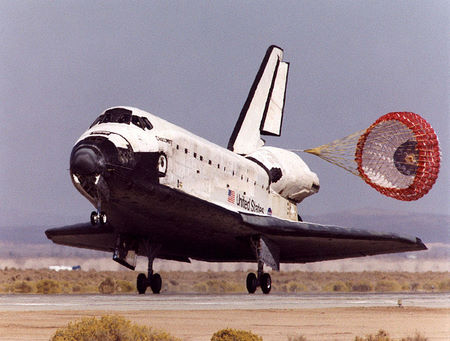 A lot of the detail of the first flight was lost on me. For example, I didn’t really get how cool it was that the guy flying the thing that day had walked on the moon. Also, I didn’t appreciate that this was the first time NASA had ever done the maiden launch of a manned vehicle with someone in it.*

For those of my generation, this was our Apollo. Except it wasn’t. Because it isn’t associated with the same romantic notions or fond remembrances. I just missed being around for Apollo. I was in existence for all 6 moon landings and was breathing air for 4 of them, albeit far too young to remember anything at all. For the kids of the Apollo generation it seems to have been very seminal. Musicians from Billy Bragg to the Inspiral Carpets people have sung about it. As yet, it doesn’t seem that the Space Shuttle has had a similar impact. I thought this particular balance needed to be redressed. By me. In a blog post. Watch the world listen.

There is perhaps a tendency to view the Space Shuttle as no more than a truck; a big white Eddie Stobart lorry (sans girl’s names). There is no romance of exploration, no big white moon, footprints or golf balls; just dull things like science and satellites.

The problem is that the Space Shuttle was not as much of a human story so it doesn’t have as wide an appeal. Sadly, and all main human stories were tragic ones. I remember both moments I found out about the loss of Challenger and Columbia. Both very sad events, not least because they were largely avoidable. It didn’t need Richard Feynman so say what the issues were they were known. And this is where, ultimately, the struggle for balance will be. NASA made great strides forward off the back of making measured risk judgements.

And therein lies the problem. Where do we go after the shuttle if we become too scared to take risks and even less inclined to spend any money?

Soon the Space Shuttles will be retired to museums and will be (may be?) replaced with something entirely less glamorous and, in many ways, a step backwards to something recognisable from the 1960’s. This isn’t how our childhood visions**** of space development were meant to look. 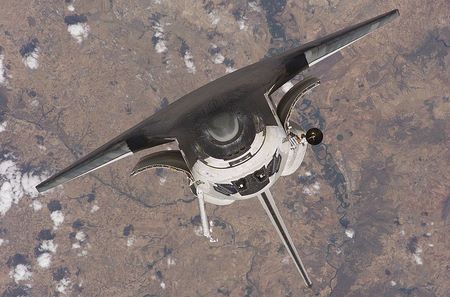 Just like the demise of Concorde, we are taking some backward steps in the way of more economic progress. Obviously, you can’t ignore the fact the successes of Apollo and the moon (and indeed that of Concorde) were achieved with a significant economic burden. But it seems the more fiscally prudent approach could easily become counter-productive with the lack of glamour and excitement denuding public interest and support further. For as cool as Cassini-Huygens and Opportunity and Spirit are, if you ask 100 people on the street what they are and they will not have a clue ( and will scurry off to watch Family Fortunes ).

As much I will be sad to see the Shuttles confined to museums, I fear more that the end of their missions will spell the beginning of a bit gap in space exploration and pushing new boundaries. If I can get a little grand, surely it is our duty as a race to do all we can do push those boundaries? If we can conjure up $800 billion from thin air to bail out a bunch of no-good greedy bankers, why can’t we go back to the high spend days of Apollo and set ourselves bigger and better challenges? Have we all become too self-interested, entertainment fuelled and introspective to care about doing anything for the sake of exploration or adventure.

I fear I may never see my Apollo, someone walking on Mars or a space discovery of life-changing proportions. Why? Because we appear not to care enough any more. The best thing we have flying now are some ageing Shuttles designed in the early 1970’s – a bit like me.

Maybe it will only be after they are gone that a more romantic remembrance of the Shuttles will emerge. Although you never can be sure. I’ve not heard many songs about SkyLab.

So, with only a few missions left the STS party is nearly over. Perhaps the only chance I’ll get to see a Shuttle while still operational is if it lands at Cambeltown, but, on balance, I’d rather than didn’t happen.

I suppose that day in 1981 must have subliminally informed my decision to become an engineer.

I was lucky enough to have my very first ‘professional’ job working in the space industry. As a very young student, I worked for the summer in the Space Group at Ferranti in Edinburgh.** There they made components for satellites and the like. My very first task was to write a procedure for applying ink to circuit boards. Sounds easy enough, except that the manufacturer’s instructions were written in French.*** After a few garbled phone calls to Belgium, I had my procedure done and submitted for approval in the US. I don’t mention this to break my own boring record. The point is that I have as much respect for the patience of the modern space engineer as I have for the ingenuity. You see, in a world where you get one chance to fire something into the sky and on a rocket and it has to work in the extremes of space for maybe 15 years without failure. You tend not to take any risks. And therefore you take your time. A lot of it.

These guys can spend ten years (or more) working on a single project and, in the 30 seconds of launch, it can all go a bit explodey of they can experience a very singular joy of seeing their creation lift off into space. The extremes of possible emotion. I was lucky enough to see this first hand when we watched a video of a launch from Kourou with the Ferranti guys as one of their projects launched. On that occasion, nothing blew up, and everyone was happy. Very happy.

I suppose I would have liked to have continued in the space industry although it’s not entirely clear if I’d have had that kind of patience!

* John Young had been offered a slight less risky first mission but declined saying “let’s not practice Russian roulette”
** I now live half a mile from the flats that now occupy the site.
*** Luckily, I could read/talk French then. Et maintenant? Bof!
**** I love how that Wikipedia page appears to be in no doubt that these ships exist

Images are courtesy of NASA/Wikimedia Commons and are linked to source pages.